Global warming is a reality, not a trick to hamper industrial growth elsewhere in the world 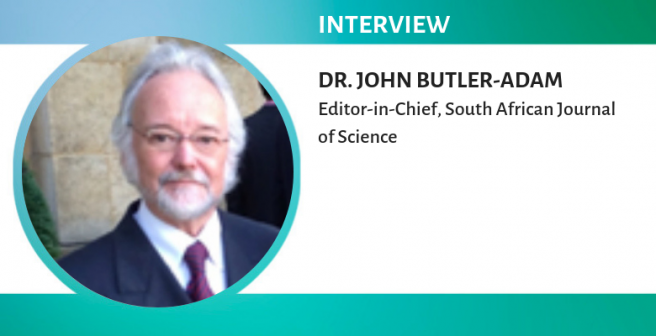 John Butler-Adam is the Editor-in-Chief of the South African Journal of Science, a multidisciplinary journal, and the second oldest journal in South Africa. He also serves as a consultant to the University of Pretoria. In the past, he worked with the Ford Foundation as the South African Program Officer for Post School and Higher Education; with the Eastern Seaboard Association of Tertiary Institutions as Chief Executive Officer; with the University of Durban-Westville as Deputy Vice Chancellor (Academic); and with Institute for Social and Economic Research, UDW, as Director. He earned a PhD in Geography, Environment, and Literature from Penn State University. Over the years, John developed a keen interest in issues in South African higher education and research. He is a frequent contributor to The Conversation and also writes thought-provoking editorials in SAJS. John has authored over 75 publications and made over 100 conference presentations. He also has considerable peer review experience and a deep understanding of peer review and the challenges that SAJS reviewers experience.

Here, we try to know more about the South African academic system and how researchers are promoted and evaluated. We get John to share his views on South Africa’s contribution to global academic research. The highlight of this interview is the discussion about the concept of post truths and how they influence the validity of facts and research in science.

How does the academic progression system work in South Africa? How is the performance of researchers and universities evaluated?

This is varied and erratic, to say the least. In most South African Universities there are six levels of academic appointments:

Evaluation: There are rules that relate to academic qualifications, publications (and where these appear), postgrad supervision, and service to university responsibilities (committee work). Deans propose appointments or promotions; a university wide sub-committee of the Senate usually makes the decisions. There are variations; and there are arguably wrong decisions from time to time – for reasons that often suit the university in question.

Where does South Africa stand in the global research landscape and what are some of the unique challenges South African researchers face?

Sub-Saharan Africa produces about 1.1% of all “new knowledge” (i.e. research published in recognised journals). South Africa produces about 70% of that 1.1%. So South Africa is the dominant research generator in Africa (think of SALT, Meerkat, the SKA; AIDS break-through research and the awards won, in this respect, by the Abdul Karim husband and wife team, and by Glenda  Gray;  the major research regarding malaria (in dedicated research units/centres in three universities); and bee research (i.e. food survival). Challenges: general – funding as SA underfunds research in terms of proportion of GDP; too few postgraduate students and, especially, doctoral graduates and women at this level of research. The DST, however, does a great job in addressing these issues.

Also, what is the extent to which open access has been adopted and implemented by the academic and publishing communities in South Africa?

The Academy of Science of South Africa (ASSAf), and the Department of Science and Technology (DST) fully support Open Access (OA) publishing. The SAJS is OA; free to publish; and free to read, on two internet sites and in four formats. The SAJS and a good number of other South African journals are members of SciELO – and membership requires OA as a condition for membership. We could do better, but already do much better than many other countries. OA is a topic of constant attention. To what extent? Extensively!

There are three major sources of funding for research – the universities themselves (so, indirectly, the (national level) state; industry in the broadest sense – manufacturing companies, mines, commercial firms, law firms – the list is long; and then the state directly through the DST – sometimes from the DST itself, and in other instances, the two major quangos funded by the DST – the National Research Foundation (NRF) who fund ASSAf (and therefore the SAJS  owes its existence to NRF) and the Human Sciences Research Council (HSRC). State funding is, however (all sources included), lower than it should be.

South Africa is known for its research output in the health sciences and clinical trials as well as research that is unique to the subcontinent. How do you think this contributes to world research?

The work undertaken in the areas of HIV/AIDS, malaria (three universities have dedicated and complementary malaria research units – Stellenbosch University, University of Pretoria and University of Cape Town), and TB (including research on the creation of an anti-TB inoculation) certainly make major contributions to global research in those areas. Professor Glenda Gray, CEO of the South African Medical Research Council, head of a major mother-to-child HIV/AIDS programme (funded by the National Institutes of Health, NIH, in the US) and professor at Wits University has been named by TIME magazine among the top 100 most influential people in the world. And she is not the only world-renowned South African health researcher. Salim Abdool Karim and his wife Quarraisha Abdool Karim both have joint appointments in the US, and a Wits Professor (the Health Associate Editor for the SAJS) works at Wits University for six months a year and in California for the other six months. Three universities have major malaria research centres, which undertake work in a wide range of issues relating to the control of malaria and its treatment. And let’s not forget Chris Barnard, the South African cardiac surgeon who performed the world's first human-to-human heart transplant! So, yes, in South Africa research in the health and medical fields, and researchers, are internationally recognised. Why so? I think there are two reasons for this: First, we have very large numbers of people who suffer from the diseases I mentioned before – so the healthcare and treatment needs are great; and secondly, we have outstanding, world-class medical (and related) schools in at least five universities, and they produce high quality researchers as well as general practitioners.

In an article published in SAJS you state that journal rejection rates are a far more reliable indicator of quality. How so? Could you elaborate?

Another essay looms. But let me be as concise as possible. While it is true that journals with high IFs are also prestigious and publish (for the most part) quality research. But the IF is for the journal – not for each paper. So to judge a paper on the basis of where it is published is only of part value and can also be  “wrong” to some extent. Journals with high IFs also publish “not so good” research at times – and often have to retract published papers that are found to contain instances of unethical behavior. On the other hand, rejecting all but the best papers received means that a journal will, largely speaking, only publish the best. At the SAJS, for example, our rejection rate is just over 80%. If one wants to know how well a researcher is doing, then her or his h-index value is a better measure (although the h-index is also not perfect!).

I am going to allude to another really interesting article you wrote about post-truths. For the benefit of our readers, could you please tell us about post-truths and how they play an important role in the communication of scientific research? And how can researchers ensure that they are loyal to the facts?

The difference between not telling the truth (politicians have done so forever!), and post-truth, is that in a “truth era” (as best we understand it) the lies/untruths are seen and (largely) understood to be what they are. Conversely, in a post-truth era, lies or part lies become the truths that they are not. (Donald) Trump says that no one will be worse off when “Obamacare” is abolished; his spokespeople repeat is over and over again; it floods the social media – and large numbers of people believe it when there is, in fact, abundant evidence from equally abundant sources that 23 to 24 million people will be worse off. The supporters of Brexit said, over and over again, that Britain will be better out of the EU than in; enough people began to believe this statement just because it was repeatedly declared and they voted accordingly. That’s a part of the post truth era since there is substantial evidence that exiting will not leave Britain better off.

Post truth in science has two facets. The first is the falsification of research processes and outcomes – bad (sometimes dangerous) research. The saving grace here is that post-truth research is usually uncovered and identified for what it is – even if that process takes a long time – because, by their nature, researchers check other people’s work. This first aspect is also susceptible to ideological positions that simply rule out some truths on the grounds that they don’t fit well with the ideology, e.g., this is why retractions come to light – because of the fact that science is based on questioning what has already been published. This helps check unethical research practices.

The second facet is the role that good science needs to play in countering post truths (“alternative facts” as one Trump spokesperson notoriously put it).  For example, take the case of the climate change support discussions. Global warming is a reality. It is not a Chinese trick to hamper industrial growth elsewhere in the world! And the best way to save science in the era of post-truths is to persistently and resolutely counter such “alternative facts” with demonstrable evidence. The marches around the world in support of this role are a start.

Thus, both aspects mentioned above – not taking published research/established findings at face value and reproducing the methods of a study as well as countering alternative facts with the help of demonstrable evidence and mobilized communication – will help the scientific community ensure that it is loyal to facts.

This brings us to the end of the first part of this interview. Read the second part, where John talks about academic publishing and peer review.

What my postgraduate degree means to me 3 min read