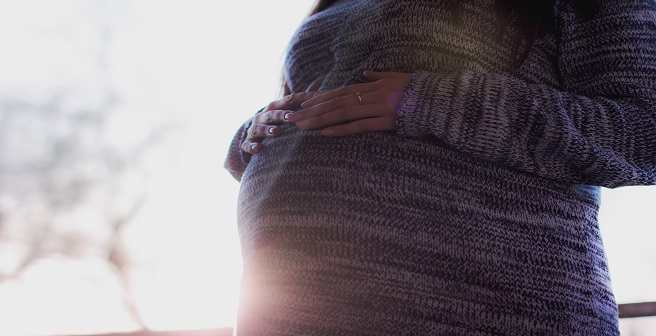 Editorial Note: This article was originally written in Korean by Jeong In Yun on her blog. This translated version has been republished here with her approval.

I was confirmed to be pregnant and started experiencing bouts of morning sickness. However, I was still conducting experiments in a lab. After confirming my pregnancy, the first thing I did was to disclose this fact to my lab supervisor and colleagues. "I am pregnant!" I said. Normally, in the early stage of pregnancy, as there are many possibilities of miscarriage, most women do not reveal the news of their pregnancy for a few weeks. But I chose to announce it right after a blood test. Why?

The reason was simple. I am a scientist who conducts experiments in a laboratory, which could be very hazardous. Especially since I am an organic chemist, I need to work with lots of reagents.

Bottles of some reagents I use in the lab

Several of the materials I work with have hazard warnings, such as with a skull and crossbones, fire warnings, or inhalation toxicity labels. Sometimes, I need to operate equipment that emits radiation or high magnetic fields. Thus, when I discovered that I was pregnant, I realized that I would need the help of my colleagues who worked together to protect me. Even if I wear a mask and put on a lab coat, if someone uses a toxic substance outside of a laboratory exhaust system, I have no choice but to be exposed to that toxicity.

The most concerning aspect is the unique smell in a chemistry lab. No matter how well-equipped a laboratory is or if it has an exhaustive ventilation system, there is always the odd and nasty smell of reagents that lingers. Besides, there was no lab coat for pregnant women to protect me and my fetus. A lab coat is the final defense line that keeps scientists from harm, such as cuts, burns, or exposure. However, I found no lab coat that would fit a pregnant scientist.

As my baby bump was getting bigger, it was impossible to find a lab coat that fit me. At first, I managed by wearing a larger lab coat for several months. But six months later, I could not even button it up! So I tried on a men’s lab coat, which was too long for me. Eventually, I gave up wearing a lab coat and wore an apron during the last month of my pregnancy. 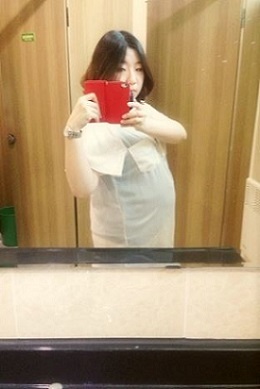 There are maternity uniforms for soldiers, flight crew, and bankers, but why is there no lab coat for pregnant scientists? Is it because there are no researchers who say they need it? I was insecure there was nothing to protect me.

Where is the toxicity information for pregnant researchers working in labs?

Lab safety education was also an area of great concern. Of course, the environment of laboratory workers has changed a lot over the years. As the awareness of laboratory safety education has increased, every lab researcher’s standard attire includes a lab coat, goggles, mask, and gloves. Some also use fume hoods, so the risk of respiratory toxicity is relatively low. However, I find that there is still a lack of awareness of safety culture in laboratories, especially regarding the toxic substances that researchers might likely be exposed to while working in a lab setting.

In fact, after informing a supervisor about my pregnancy, one of the first things I did was to check the toxicity information about the reagents and solutions I used. It was hard to find any toxicological information for pregnant women. The lab safety guideline did not specifically mention information about reagents that could negatively affect pregnant researchers. And I found that only a little information was available about genomic toxicity.

Most importantly, I realized that all toxicity information seems to be created bearing adult males in mind (although recently there is some information for females). As most of the information in the MSDS (Material Safety Data Sheet) is based on adult males, I was very anxious during my pregnancy. So I did all possible medical tests and after the baby was born, tried to closely monitor his development. Thankfully, my son is growing well and is full of energy, though being an SGA (Small for Gestational Age) baby, he has to undergo regular growth tests.

If someone asks me how inconvenient it is to find the MSDS to check the toxicity of each and everything I use in the lab, I would say that it is like having to change one hundred thousand dollars to one cent coins and count these coins one by one. How many researchers can spend this kind of time and bear the inconvenience of inspecting information individually? Fortunately, my laboratory is well-equipped and there were no reagents that could be problematic when inhaled. But I was annoyed that I had to find information on each one by myself. I hope that this changes in the future, and researchers who are pregnant have a well-established system for ensuring laboratory safety so they can easily access information about hazard solvents or reagents during pregnancy with just one click.

Pregnancy, childbirth and...the life of a mother scientist goes on

Still, it was rather easy to find out and cope with the things related to my body. The big events that I needed to prepare for were figuring out how graduate students (who don't have any leave) use maternity leave and parental leave to manage childcare once the baby is born.

So, I did not have enough time to undergo any special prenatal education for my child. If I were to pick out one thing I did while I was pregnant, it would be lab meetings and seminars! I can say that when my child was in my womb, he spent his time studying the beautiful mechanisms of total synthesis and organic chemistry in journals like Science, Nature Chemistry, and Organic Letters.

My child also loves listening to the English language. Perhaps this is because when he was a baby I would take him to the laboratory on weekends, and a few foreign researchers took care of him. In fact, I have never given a serious thought to the concept of prenatal education, but it seems to make sense to me now, considering the behavior of my child these days. Without any coercion from me he is becoming a ‘big fan of science’, setting up his laboratory where he studies wet tissues for himself. 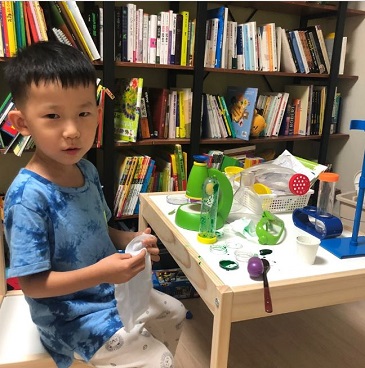 My son at his own lab at home