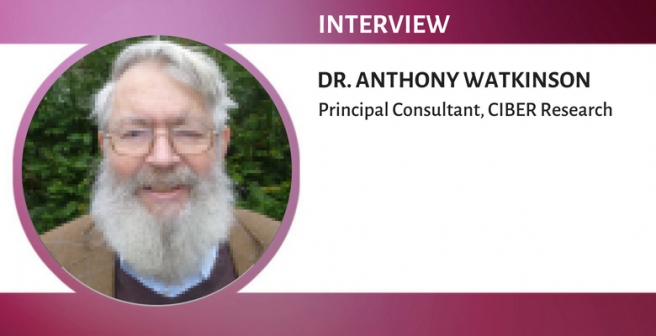 He is Co-Founder and Principal Consultant of CIBER Research, an interdisciplinary and independent research group engaged in funded studies, contract research, scholarship, and consultancy in its areas of expertise. A consultant to many organizations and learned societies, he also writes and runs courses and seminars for the International Association of Scientific, Technical & Medical Publishers.

Watkinson is an active academician, with a special interest in the shift of scholarly communication from print to digital format, including open access, data, social media, and outreach. For six years he was Visiting Professor in the Department of Information Sciences at City University. He is an Honorary Lecturer at University College London (UCL) and an Advisory Board Member at Ubiquity Press.

Can you describe your current areas of work and your interest in scholarly publishing?

As a researcher I am currently working on Trust by researchers in information resources (see www.ciber-research.eu and look under projects) and writing papers from the report, “Trust and authority in scholarly communications in the light of the digital transition,” to the funder, to be published in refereed journals.

From my understanding, the Trust project is a 15-month investigation on the nature of trust and authority in scholarly communications during the digital era. It is funded by The Sloan Foundation and conducted by researchers from the University of Tennessee, Knoxville, (UTK) and CIBER Research. The report you mention provides an overview of the investigation in which key findings are highlighted; detailed findings are being disseminated through roughly nine working papers that are to be published by various journals. Can you tell us what or who prompted the coming together of CIBER, Sloan, and UTK in this way?

I was not involved in the original proposal so I cannot be sure but with funders like Sloan or Mellon in the US some of the ideas are originated by them but some (as I believe was the case this time) are presented by the research groups to the funder because it is known that areas of digital transition (in this case) are of interest to them. CIBER’s main interest has been in digital transition in scholarly communication since we started in 2002. We expected more change.

What did you expect to change?

Our main thesis and one which has been validated by other research we have done is that, over the

last two decades, the lives of all of us have been changed a great deal by the digital revolution and that researchers are human beings like the rest of us and work like the rest of us. They are not a different breed. We have found that, for example, their behaviour as readers and their searching behaviour has changed along with the general behaviour. In our proposal we suggested that new forms of communication like social media or new journal models might be either much more used in formal scholarly communication or on the verge of being more used. We looked for evidence of what is called transformation of scholarly communication.

Trust and authority in the context of scholarly communications: you have discussed this many times. How have they developed and are they changing with the digital age?

This is a big question. Have a look at the report (see above [question #1]). The basic message is that researchers are still wedded to peer review and they approach information sources in much the same way as they always have, with perhaps more caution and more confidence in their abilities to sort out the wheat from the chaff.

What prompted your interest in the shift of scholarly communication from print to digital format?

In 1994, I put the first journals online in PDF (the CAJUN project) and since then digital transition has been a main interest. I was a co-founder of CIBER Research in 2002 when I held a visiting chair at City University [London].

I was the publishing director and the main work was done by Deborah Kahn who was head of our journals. I have forgotten how the relationship originally came about in 1992 before we were aware of the web, but it was not initiated by me. I had much more to do with the follow through by about 1994 when Deborah Kahn left for another job. As far as CIBER is concerned, the first and current director of CIBER was and is Professor David Nicholas who now holds chairs at the University of Tennessee, Knoxville, and the University of Northumbria, UK. He was then Professor of Information Science at City and he invited me to become a visiting Professor in his department. Dr. Ian Rowlands (now University of Leicester) and I discussed this with him but he was the real originator.

[The CAJUN (CD-ROM Acrobat Journals Using Networks) project’s aim was to distribute ‘electronic’ versions of a Wiley journal and a Chapman & Hall Journal on CD-ROM and over the networks. Chapman & Hall were interested in the use of PDF in journals online and Wiley in putting content in this format on CD ROM. The other collaborators were the University of Nottingham Computer Science headed then by Professor David Brailsford and Adobe themselves.]

What is your perspective on open access and its impact for scholarly communication?

That is a very big question. Publishers are still the main facilitator of scholarly communication and this has been recognised by the gold policies of the UK government. [Under the gold policy in the UK, researchers whose work has been funded by the RCUK, must publish in OA journals to allow immediate and free access to the research.] There is a big problem and that is the pressure all the time not to recognize costs to the publisher (forcing publishers to reduce article processing charges) which is particularly difficult in offsetting costs when print is still demanded by the reader in many cases. There are lots of other costs too. Every year all of us expect enhanced functionality from online services and every year costs of providing content goes up. Someone has to pay and this includes the costs of investing for the future. Open access (OA) makes easier lots of exciting developments especially when the OA is libre [for readers] not gratis and re-use becomes easier. However if all formal scholarly outputs were (because government funding demanded it) open access from publication or soon after, the scramble for funds to pay for this would mean that some scholars would not be able to afford to publish. Currently not all can afford to read the publications. Which is worse? I should add that this is my own view not an official view of CIBER and indeed all my comments here are my own view not representing any of the various organisations I do work for.

[According to the RCUK policy on OA, a researcher must grant open access under a CC-BY license to any, peer-reviewed published research and conference proceedings that is funded by the RCUK. This means all of the content is freely available to anyone worldwide. Two tracks of OA are available: gold and green. In choosing gold, the researcher selects an OA journal and publisher in which the research is immediately available upon being published. The green choice requires self-archiving through a repository that makes the work available for free after an embargo period (depending on the discipline, this period can be 6 to 24 months after being published). Researchers decide which route to take.]

What can you tell us about the current climate in emerging research hubs such as Asia, South America, Middle East, etc. in respect to open access?

Some of the research we have been doing relates to the emerging research hubs. Basically, it shows that countries like India and China are keen on OA but not willing to pay for it. I have also some local knowledge – see the session [Session Two: New Directions for Scholarly Publishing: Changes in Asia] I chaired in Singapore last year.

Given your close work with both commercial and nonprofit publishers, at what points would differences between them become crucial to authors, journal editors, and librarians?

There is little difference at the bigger level – compare ACS [American Chemical Society] and Elsevier. So far almost all learned society publishers need the income from journals to provide services to members.

My perception is that it has changed very little and I am hoping to renew research in this area soon. As far as I can see whereas some publishers have found that subscription models work, others are going to depend on subsidies, however they are disguised. I do not know where the evidence about the lessening of quality comes from. I am told that tenure committees demand a monograph and it has to be printed in many cases, which seems to me to be ludicrous. I am providing a link to a much longer document, “Electronic Solutions to the Problems of Monograph Publishing”, which I wrote in 2001. Amazingly little has changed.

There have been considerable technological advances in the field of scholarly communication; are there any specific developments you deem especially promising that you would like for authors, journals, and librarians to look forward to?

Yes – look at the site of Force11 [The Future of Research Communications and e-Scholarship]. I am a great believer in this agenda or at least some of it.