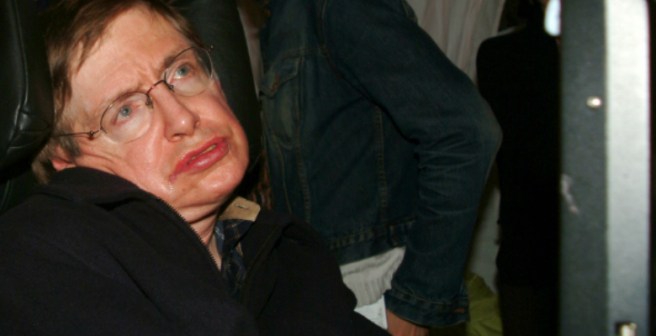 My goal is simple. It is a complete understanding of the universe, why it is as it is and why it exists at all.

Stephen W. Hawking, the scientist who captured the world’s imagination with his genius mind and exceptional grit, died at the age of 76 on March 14. While battling a rare, progressive neurological disease for a good part of his life, Dr. Hawking shaped the field of cosmology and went on to become one of the most well-known scientists in the world. "Few, if any, have done more to deepen our knowledge of gravity, space, and time," said British astrophysicist Martin Rees.

Hawking was born in 1982 in a family that was considered “highly intelligent and somewhat eccentric.” His father was a well-known scientist in tropical medicine who wanted his son to pursue a career in medicine, but Dr. Hawking was drawn to mathematics and physics. He eventually developed an interest in cosmology, and his formal study in the area began after he joined the University of Cambridge.

At the age of 21, Dr. Hawking was diagnosed with amyotrophic lateral sclerosis and was told by his doctors that he probably would live for two more years. Following the diagnosis, Dr. Hawking fought a brief spell of depression. He then decided to submerge himself into work. The disease progressed slower than anticipated, but eventually confined him to a wheelchair. Despite this, Dr. Hawking’s mental faculties were as sharp as ever. In his bestselling book A Brief History of Time, Dr. Hawking credited the disease for motivating him to work harder than ever before. “After all, if I was going to die anyway, I might as well do some good,” he wrote.

3 Techniques to avoid plagiarism in your research paper
Plagiarism is one of the most common reasons for…
4.6k

In his quest to demystify the origin of the universe, Dr. Hawking became the first cosmologist to propose the theory of singularity that linked Einstein’s general theory of relativity to quantum mechanics. He worked with fellow scientist Roger Penrose to reveal that the entire universe began in a singularity, which is determined by laws of science. This theory received a lot of attention and shot him to fame.

Black holes have perplexed researchers since a long time. As a result, Dr. Hawking’s research on black holes made him a phenomenon in cosmology. His theoretical work explained the life cycle and properties of black holes, which came to be known as “Hawking radiation.” His theories and observations about black holes revolutionized the existing understanding of black holes.

Generations of researchers have been inspired by Dr. Hawking’s work. In particular, his doctoral thesis was sought for years by researchers. Last year, in October 2017, Cambridge University made Dr. Hawking’s PhD thesis titled “Properties of Expanding Universes” freely available. Such was the enthusiasm of people who rushed to read his thesis that the university’s open access repository crashed! “By making my PhD thesis Open Access, I hope to inspire people around the world to look up at the stars and not down at their feet; to wonder about our place in the universe and to try and make sense of the cosmos,” Dr. Hawking stated.

Dr. Hawking was known for his wit and sense of humor. Marika Taylor, Dr. Hawking’s former student and now professor of theoretical physics at Southampton University, reminisced about his “wicked sense of humor.” To him, humor was a key to overcome his debilitating condition. “Keeping an active mind has been vital to my survival, as has maintaining a sense of humor,” Dr. Hawking said in a documentary that was shot in 2013. Speaking in jest about his appearances in popular media, he said: “I am probably better known for my appearances on ‘The Simpsons’ and on ‘The Big Bang Theory’ than I am for my scientific discoveries.”

A visionary scientist, Dr. Hawking often stepped outside of his field of research to express his opinion on a number of topics. His views sometimes stirred controversies, such as his warnings that humans might encounter aliens who could be hostile. He also made predictions about the destruction of the human race due to global warming and expressed the threatening possibility of artificial intelligence surpassing humans. “Hawking was happy to court controversy,” states The Guardian.

Dr. Hawking’s contribution to unraveling several scientific conundrums was recognized with many science prizes including the Wolf prize, the Fundamental Physics Prize, the Breakthrough Prize, and the Albert Einstein award, among others.

In the statement announcing the news of Dr. Hawking’s demise, his children said: "He was a great scientist and an extraordinary man whose work and legacy will live on for many years," Describing the loss to science owing to this tragic event, astrophysicist Neil deGrasse Tyson said: “His passing has left an intellectual vacuum in his wake.”

If you’re interested in reading Dr. Hawking’s PhD thesis, you can find it here: Properties of Expanding Universes.

For the man who never failed to inspire us
RIP Dr. Stephen Hawking pic.twitter.com/80xYkfcy44

Stephen Hawking Dies at 76; His Mind Roamed the Cosmos

Stephen Hawking's secret to surviving his terrible condition? A sense of humor.

Stephen Hawking's warnings: What he predicted for the future