A pint of science for everyone, everywhere - A conversation with Dr. Elodie Chabrol 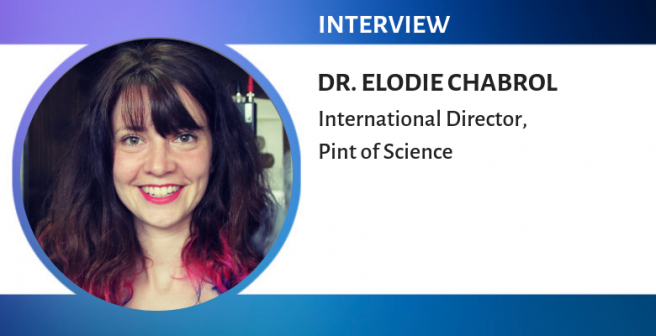 Research communication is a buzzword today, and almost everyone is talking about exploring non-traditional ways of communicating science to scientific and non-scientific audiences alike. Some of the most commonly discussed forms of communication are video or graphical abstracts, lay summaries, posters, infographics, conference or meeting presentations, etc. What if I told you that science can also be discussed at a pub and that it is possible to get scientists to exchange ideas with people while sipping a beer! Sounds interesting, doesn’t it? Let’s talk to someone who has been involved in this – in getting scientists to talk about their work at pubs across the globe.

Meet Dr. Elodie Chabrol. Dr. Chabrol is a full-time science communicator and event organizer. She is the International Director of Pint of Science, a global festival that aims to get people to hear scientists talk about their work in an informal setting. Dr. Chabrol also founded the Pint of Science France and recently joined Podcast Science, a weekly popular science audio podcast in French. The main aim of the Pint of Science festival is to deliver interesting talks about scientific research in an accessible format to the non-scientific community, mostly at bars and pubs. The informal setting enables greater interaction between the scientific and non-scientific community as well as helps the former build a stronger public interest in science.

Dr. Chabrol holds a PhD in Neuroscience and has also had postdoctoral research experience. Her academic background gives her a strong first-hand understanding of how researchers can communicate science better. After initially setting foot in science communication she never looked back and has been with Pint of Science since 2013. Dr. Chabrol is passionate about ensuring that scientists the world over are able to share their fascinating stories and inspire others to do the same.

This conversation revolves around the Pint of Science initiative as well as the emerging global focus on communicating science through platforms other than the journal article. Dr. Chabrol also shares some interesting science communication tips for researchers.

Could you tell us more about Pint of Science and your role in it?

Pint of Science (PoS) is a non-profit organisation that brings some of the most brilliant scientists to your local pub to discuss their latest research and findings with you. You don't need any prior scientific knowledge, and this is your chance to meet the people responsible for the future of science (and have a pint with them). Our festival runs over a few days in May every year, but we occasionally run events during other months. In May 2017, we were in 21 countries and nearly 300 cities reaching 120 000 attendees in the world. I have several roles in the festival, first I’m the International Director. Every year I’m in charge of the festival’s development by selecting and guiding new countries. I also founded the French PoS in 2013 and directed it. And last but not least, I do a lot of communication and promotion of the festival in the country we are setting it up in.

Could you tell us more about the kind of discussions witnessed at PoS events? Any interesting anecdotes to share?

The discussions happening at PoS are usually really diverse; they can go from 100% science-related questions to personal ones about the researchers. For example, an astrophysicist might be asked to describe his or her day-to-day life while studying black holes in Paris.

It’s really amazing to see people wanting to know more about the humans behind the science and not just the scientific facts. I think we don’t come across scientists that much in everyday life and the representation or portrayal of scientists in the media – cinema, television, and other channels – are not the best or even close to reality. Life in a lab is nothing like the action-packed hours in a CSI lab or the quirky events depicted in Big Bang Theory. And scientists are not crazy people! I love having the general public meet scientists and enabling them to see the real people behind the science they only hear about and often find it difficult to understand and relate to.

I remember our first year in Paris, when the attendees were so fascinated by Jean-Philippe Uzan, an astrophysicist, that they asked him questions for an hour and a half and no one wanted to leave. The discussion was amazing to witness!

I started by taking part in the first PoS in UK while I was a junior researcher. At this time, I was in charge of funding and directing the French branch while simultaneously pursuing my research for 4 years. Once I completed my research, I took up science communication professionally on a full-time basis. So I could say that the transition was easy and difficult at the same time. It was easy because I was working on it for years without really having decided to leave research yet and I worked a lot during the 4 years of my research. It was difficult because when you have to work in research and then direct a festival in your free time it’s not an easy balance to achieve, but I loved it.

As I usually say, my story is about 3 things: passion, luck, and lack of sleep. Passion because I really love what I do; luck, or we could call it timing, because I contacted PoS at the perfect time to get involved; and lack of sleep because during my initial years at PoS I had to spend quite a few sleepless nights because I would be busy in the research lab during the entire day.

You are a member of a weekly French audio Podcast Science team. What role do you think podcasts play in science communication today?

Podcasts have a very big role in science communication today. It’s amazing to be able to work or exercise or travel and listen to science podcasts at the same time. Earlier, in order to be connected to science or scientific research, one would have to read about it or watch television. There was little flexibility in terms of the platform on which one could access information and the ease with which this information could be accessed: you can’t drive and read an article, but you can drive while listening to a podcast! Unfortunately, I don’t get to spend as much time as I would love to with the Podcast team but I do try my best!

If you were to identify the top trends that are changing the science communication landscape, what would you pick?

I would say that science communication is in total boom at the moment. Scientists have realized the importance of it and the public has begun to get interested in it. The big trend is probably scientists getting more and more involved and starting to realise that science communication is as much part of their job as is conducting research in the lab. This shift in mindset is a big step forward and an amazing one for the public, and we’re happy because we can offer a platform for scientists to share their work easily in lots of different places in the world.

What, in your view, are some of the most critical challenges the scholarly publishing industry needs to address today?

I’m not an expert in publishing but I see many flaws in the system at the moment and know that there are a lot of discussions around these problems. I have hope that the future is near and will be better. I think one of the most crucial points is that scientists are graded or evaluated based on the journals they publish in and they have to publish amazing data to survive in the competitive publish-or-perish world of academia. Often, negative results are left out of published findings leading to a waste of time, money, and sometimes careers. When a team invests millions on something that doesn’t work don’t you think it would be good to know what they tried to be sure no one tries and fails as well? But that’s only one of the issues of scholarly publishing – it is a very old system that needs a giant update.

Once again I’m not a review expert but I’ve seen cases in my career where the reviews were not honest because people knew the names on the paper and were concurrent and I think double blind would be fairer.

What does the future look like for Pint of Science?

We engage more countries, which is exciting, but we’re also trying to reach places where science is not really obvious and science communication needs some serious focus. We’re also expanding in each country by including more cities. We typically start with big cities and then try to go to smaller ones or even rural locations. My goal is to make science communication part of your everyday life.

Science for everyone, everywhere.

Do you have any tips for researchers to help them communicate their science more effectively?

My number one advice is: know your audience and adapt to it. For example, you should have a different communication strategy for kids, adults, the general public, and scientists because these audiences are different. Thus, adapting your content to suit the audience is the key to success. This sounds easy but it can be tricky sometimes because you have to be very careful with the language you use and ensure you communicate using normal vocabulary and not science jargon. Practicing on non-scientists friends, or family would be a great way to build confidence and ensure that your communication – the content and style – are suited to your audience!

Other tips include: Avoid simply listing scientific discoveries. Don’t forget to put a bit of you in your talk – make it personal; make it relatable. Explain why you’re fascinated by the topic you are talking about. Avoid complicated slides and graphs and of course if you can bring some props from the lab people love it! Don’t hesitate to be expressive. Facial expressions are a great way to get the message across, even if you may look silly while doing so. Good luck with communicating your science to the public!

Thanks for the advice, Dr. Chabrol. Your passion for science communication and outreach is truly inspiring!

One day at a time: Learning to cope with my anxiety 8 min read

Science Communication: Everything you need to know about it to thrive 17 min read