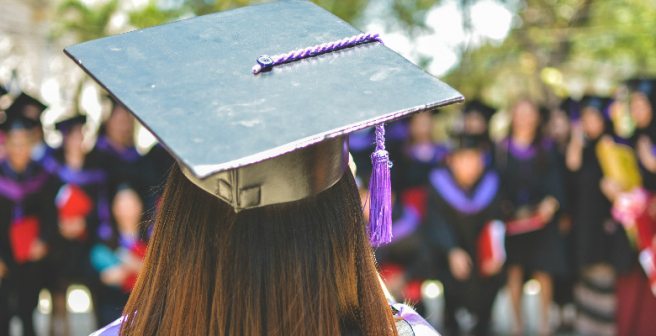 Seven months after finishing my MPhil, I have finally attended my graduation ceremony. I had heard it was weird, involving a lot of Latin and an invasion of personal space. This much was true. But it was also actually really cool.

As an American, graduation ceremonies are loud and proud. They involve speeches, hours of calling out each student’s name, and hundreds or thousands of people. They often take place in stadiums or outdoors and sometimes include celebrity speeches.

And sometimes they involve acrobatics.

As an undergrad at the University of Chicago, I looked forward to walking at graduation as a marker of surviving four challenging but amazing years. Experiencing that ceremony meant so much to me.

So, when I learned that graduation ceremonies in Cambridge are less… celebratory, I was a bit disappointed. I wouldn’t be able to graduate with friends from my program because one graduates with his or her college, and the ceremony itself is much shorter and smaller, taking place in a small building called the Senate House. No applause, no microphones, no speeches. It sounded complicated. And even a bit gloomy. But I wasn’t exactly shocked that the British don’t allow emotions even in a graduation ceremony. I wanted to attend the ceremony regardless; I was curious but did not expect much.

Graduation begins at the college. I returned to my former college, Magdalene, to line up with fifteen or so other graduate students receiving their degrees that day. A few students had come back from new jobs for the ceremony and others like myself were still at Cambridge pursuing another degree. A very reassuring praelector demonstrated what we were to do in the ceremony, and then we walked as a group from the college to the Senate House. Just as in some graduations in the States, this walk is meant to be symbolic. In reality, it’s a bit awkward. On a Saturday morning, our small group of traditionally clad graduates, in flowing black Harry Potter robes (no hats though, sadly), meandered our way through throngs of tourists who found us quite the attraction. Others ignored us. A few parents followed us like paparazzi. It was rather anticlimactic.

We stopped in our line outside the Senate House alongside groups from a few other colleges who were graduating during the 11:30 ceremony. We waited outside for what seemed like forever until we were brought inside the building to wait even longer.

I was not expecting to see what I did when we entered the Senate House. One royal-looking chair sat in the middle of the hall and a small pew was placed in front of it. Family members sat in a few rows of pews on each side. The graduates stood near the entrance and the chancellor of the university, wearing a red robe, was waiting to receive us.

It looked like we were about to be knighted. I looked around for swords. No swords. Maybe this was a coronation? No crowns either though.

But boy was this cool! My inner American grew anxious and excited all at the same time. I anticipated having to kneel before the chancellor. What if I tripped? I chuckled to myself. I wondered if anyone would react or if I would look up to find stoic faces glaring down on me in disappointment.

My thoughts were interrupted when the ceremony began. Ninety percent of it was in Latin, announcing something or the other about the graduates and presenting each graduate to the chancellor king guy. It sounded like the Latin text used in blank templates:

Hmm, yes… I looked around the room to see if the audience was pretending to follow along. They were.

After decades of waiting for the other colleges to be called (Jesus, then Christ College, hehe), Magdalene was finally called forward. My legs were tired from standing. How was I supposed to walk and kneel?

I silenced this inner crisis of clumsiness to take it all in. We were presented by the praelector in groups of three or four. Traditionally, thousands of years ago, praelectors presented graduates individually to the chancellor by taking their hand and announcing in Latin that this graduate is to receive a certain degree. Because the university has grown in size since then, they compacted this process by having three or four students each take a finger of the praelector’s right hand.

How was I ever going to keep a straight face? It was already hard enough as Magdalene’s praelector was so much louder and more enthusiastic than the others so far in the ceremony. Somehow, I managed.

When my name was announced, I kneeled in front of the seated chancellor and put my hands in prayer position. It was at this moment I discovered that the pew for kneeling had nothing to hold onto. That would have made it far too easy.

The chancellor then leaned in far too close for comfort and grasped my hands. I peered up at him, trying not to break my pleasantly stoic expression (we were told this is the moment an official picture is taken). This moment I will never forget. He had a kind face and passionately bestowed upon me my degree in a way that implied he wasn’t simply going through the motions. It felt like a moment from a choreographed Wes Anderson film.

It was like an academic blessing. And even though it was in Latin, it didn’t need translating.

I then got up and fumbled a bit to take a step back and bow. I nearly tripped on a step I didn’t see, hastily grabbed my diploma from someone waiting near the exit, and walked out of the building to wait outside for the ceremony to end. I breathed a sigh of relief.

Woah. That was not at all what I was expecting.

It was an experience I was glad not to have missed. After experiencing both Chicago’s and Cambridge’s ceremonies, I think it’s safe to say that Cambridge’s graduations are definitely underrated.

Then hunger, which adrenaline had told to kindly wait until after the ceremony to annoy me, hit me. Good thing there was a lunch to follow!

Melissa Gatter (@melgatter) is a PhD candidate at the University of Cambridge. This story was published on May 8, 2017, on Melissa’s blog, The World Behind the Curtain (available here), and has been republished here with her permission.

My PhD was just as tough on the people close to me, as it was on me 6 min read

How I defended my dissertation online: 7 Researchers share their experience 17 min read