The Federal University of ABC: Pioneering…

The Federal University of ABC: Pioneering… 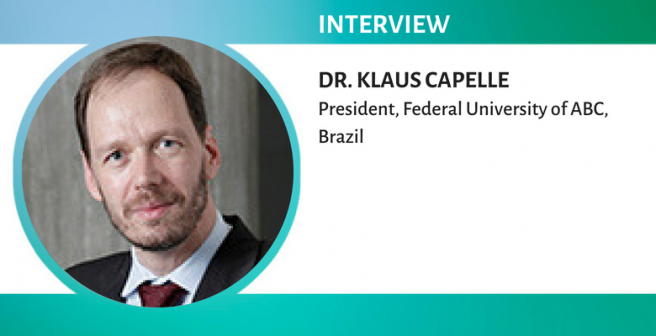 Meet German physicist Dr. Klaus Capelle, President of the Federal University of ABC (UFABC) in Brazil, who made rather unconventional, yet successful, career choices. He authored an award-winning PhD in Physics (best doctoral thesis of the year) at the University of Würzburg in Bavaria in 1997; acquired a second master’s degree from the University of New Mexico in Albuquerque (United States); and was visiting researcher at the Institute of Chemistry of São Carlos (IQSC), University of Missouri in Columbia (United States), University of Bristol (United Kingdom) University of Lund (Sweden), and Berlin’s Freie Universität (Germany). Dr. Capelle had the academic success needed to carve a successful career in his own native country. Instead, he chose to pursue postdoctoral research at the São Carlos Institute of Physics (IFSC-USP) in Brazil from 1997 to 1999. Following this, he stayed on in Brazil as a FAPESP Young Investigator grant recipient at the São Carlos Chemistry Institute at USP (1999 to 2003); Professor at IFSC (2003 to 2009); Professor, research provost, and later President at the UFABC. Dr. Capelle has authored over 90 scientific papers and is on the editorial board several journals. He received a Certificate of Appreciation from the American Chemical Society (2011) and an Outstanding Referee Award from the American Physical Society (2012), for his outstanding work as a reviewer of scientific manuscripts.

The UFABC is building a reputation as one of Latin America’s pioneering research universities. It is the only university in Brazil where all of the professors hold PhDs; it is also the only academic institution whose scientific publications have an impact factor above the world average. As president of the UFABC, Dr. Capelle has to ensure that the university maintains this record and implements several other policies to become a world leader in research education. This interview promised to be exciting! Not only could I talk to Dr. Capelle about the UFABC and its pioneering efforts but I could also query him about his unconventional career choices.

In this second segment, Dr. Capelle shares his views on Brazil’s education system, the challenges faced by authors in Brazil, and on Brazil’s standing in the global research publication landscape. Brazilian academics still need to accept the concept of diversity and work toward a more robust and international system of higher education and research. But despite these challenges, Brazil's research output does receive a lot of international attention. Also, according to Dr. Capelle, Brazilian researchers need not despair because of the current political and financial difficulties the country is facing.

What, according to you, are the challenges faced by Brazil’s higher education system in terms of operations and merit?

One challenge is encouraging diversity. We do not advocate the UFABC model for all Brazilian universities. Rather, there must be a healthy ecosystem of higher education institutions with different approaches, sizes, and philosophies. We need larger universities that provide higher education to many students, and smaller universities with special missions such as frontier-level research, innovation, interdisciplinarity, expansion of higher education opportunities to less-favored regions of the country, and internationalization. In my view, not all universities can do everything equally well. Moreover, the concept of institutional diversity is not supported by all members of the Brazilian academic community, and it does not receive enough encouragement from the current educational system in Brazil.

A second challenge is governance. Brazilian public universities are subject to the same public service laws as any other part of (municipal, state or federal) government. As a result, the education system is dealing with an archaic hiring process (for staff and faculty), low salaries, and rigid labor regulations. This in turn leads to frequent strikes of the university staff as well as to paralyzing, highly procedural, and detail-obsessed evaluations by a myriad of controlling authorities and agencies. All this creates an environment that reduces agility, efficiency, and innovation.

The way I see it, the two challenges, diversity and governance, are related: in order to evolve, specialize, and adapt to changing environments and demands (all of which lead to diversity), universities and their managers need to be free to experiment without fear, establish their own procedures to fulfill to their missions, and innovate (all of which require adequate governance).

In recent years, Brazilian research has received a lot of global attention. Where do you think Brazil stands in the present-day global research and publication scenario?

Despite the challenges and problems I described in my answer to the previous question, Brazilian higher education and Brazilian research have made tremendous progress over the past decades and are, in many fields, internationally competitive. In quantitative terms, according to recent data from CNPq, most Brazilian publications were in the medical, biological and agricultural sciences, followed by physics, chemistry and engineering.

According to the Scimago ranking, in 2014 Brazil ranked 13th globally with regard to its total output of scientific documents and 18th with regard to the citations received by these publications. These are the best positions held by any Latin-American country, and higher than those of many European or Asian countries.

You made an interesting statement in a previous interview: “It is a gratifying experience. As a professor, I could obtain a scholarship for a single student. As a dean, I could do that for 100. As president, the scale of benefits I can provide for students becomes even greater.” Could you elaborate?

When you are a professor and obtain money for funding students to work with you, you know the project you will be working on together and you see the happiness on their faces when you tell them that they got the scholarship. When I was research provost, I was responsible for obtaining, and distributing many hundreds of scholarships. The scale of the benefits is much larger, but I did not know the individual students anymore and did not even understand the titles of some of the proposed projects that were far from my own field. Now, as university president (rector), I handle the budget of the entire university and do not even see the titles of the individual projects or the names of the individual students anymore, but I know that what we spend benefits thousands of students and hundreds of professors. As the scale of the benefits gets larger, the satisfaction becomes more abstract and you are more remote from the beneficiaries. You need to get used to that to do this kind of job.

What advice would you give Brazilian researchers in the face of the current financial crisis and its effect on funding and scientific output?

Financial crises come and go. The current one is particularly bad because it develops in parallel with a political crisis, and the two mutually reinforce each other. However, careers last for decades and universities are built for centuries or more. There is no reason to despair because of a few difficult years.

We’d now like to know more about you. You started your career as a German physicist but opted to pursue further research in a tropical country. You also changed career paths and moved into operations and institutional management. What prompted this shift, and why did you choose Brazil? What potential did you see there? How easy or difficult was it for you to adapt to a different culture. And how far do you think you have come in terms of understanding the struggles faced by researchers in Brazil?

Thus far, there have been two major transitions in my career. The first was when I left Germany, after obtaining my Ph.D. in theoretical physics, to begin a research project in Brazil. The other was when I gave up my professorship at the University of São Paulo (USP, Brazil´s principal and best-known research university) to help consolidate the (then) very young UFABC. In both cases, I left behind a well-recognized and highly structured traditional environment and moved to a very dynamic, emerging environment with many opportunities. In this broad sense, I took the same decision twice. While such decisions open up new windows of opportunity, you do pay a price for them, and sometimes you ask yourself whether a traditional career path would have been an easier choice. The truth is, while a traditional career path would certainly have its own challenges, it could hardly have been as rewarding or exciting as the unconventional path! A poem I love is “The road not taken”, by Robert Frost, which is about a traveler´s choice between two roads, each representing a path in life. It ends with the words “I took the one less traveled by, and that has made all the difference.” It does.

Do I understand the struggles faced by researchers in Brazil? Well, I am one of them, so their struggles are my struggles! But, as Brazilian composer Tom Jobim said, “Brazil is not a country for beginners,” and sometimes I still feel like a beginner, even after almost 20 years in the country.

Thank you, Dr. Capelle, for sharing your perspectives.

Read Part 1 of the interview with Dr. Klaus Capelle