How I got a chance to save sea turtles with science 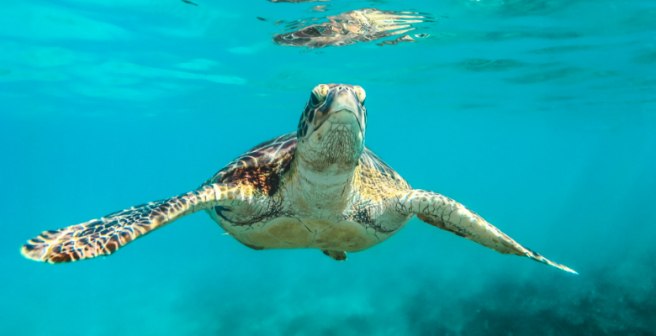 I wanted to tell you all about my experience in Dammam while it is fresh in my memory.

I have been in contact with a researcher working at King Fahd University of Petroleum and Minerals since March because he works on turtles in the Arabian Gulf, and there is not a lot of current turtle work being conducted in this region of the world. He was assisting me in the planning of my field work in the Red Sea, and had kept me in the loop on the project he’s currently doing. He had invited me to visit the university to learn from a turtle expert, Dr. Jeff Miller. But as research and science goes, there was no set date and it all depended on the weather and coastguard.

They were supposed to conduct the same project in June on Hawksbill turtles, but the wind was too strong, which unfortunately, ruined the whole project. Anyway, I was basically on call for the end of July, knowing I wanted to visit and learn about their turtle project. No one at KAUST studies turtles, so I thought it would be awesome to go and get some experience. I finally got an email saying that they were heading out for field work, a day before my planned visit. So, I quickly submitted a travel request through my university, purchased tickets, and packed. It’s important to note that this university is an all-men university, which rarely has women visitors. So it was super cool that I was invited to learn from them.

I arranged my taxi for 7:30 AM, many hours before my flight because it is currently Hajj season and I heard the airports are quite busy at the moment. Ended up being aggressively early but that’s okay. I brought a good book and found a little corner and got in a good read for a few hours. The flight to Dammam took about 2.5 hours. Dammam is located in Eastern Saudi Arabia, near Bahrain. During the flight, I was a little nervous that I would have no idea where to go once I arrived. I still hadn’t received any information on what hotel I would be staying at, and I didn’t know what building to meet in at the university. Luckily, when I got to the airport, I found WiFi and received an email about the hotel name. I found a taxi driver and showed him the name of the hotel and off we were, for a 45-minute drive to Dharhan. During the drive, I got a call from an administrator at the University that was helping to arrange my stay, and he sent me information about what building to meet at. It all was perfect timing, and I had just enough time to drop off my bag at the hotel and then go straight to the lab. When I arrived, there were 8 men standing around a table. Because it was an all-men university, I got a few unsure glances, but as soon as I talked with them and got to know them, they were all very kind and accepted me to assist with their work.

Working on this project were a few researchers from King Fahd University, a few employees from Saudi Wildlife Authority, and Dr. Jeff Miller, a “turtle expert” who had been studying turtles in this part of the world for many years. Because there are so few publications on this topic, I had come across many of his papers and came to think of him as “famous” in my mind. It was very cool to learn from him! He is super knowledgeable about all things turtles, and was very excited to teach people and share his wisdom and knowledge. He taught me how to properly transport and handle sea turtle eggs. As you can imagine, there is very particular way to hold them. They need to be collected within hours after the mother turtle lays the eggs. The first few eggs are very long and skinny, because her opening isn’t stretched out so the eggs need to squeeze through. Once the eggs are laid, the researchers can approach and collect the eggs. During this period, the eggs are soft and can be moved around. They need to be immediately cooled, and then they have ~2 days to be transported. During transport, it is extremely important that the eggs are cold. So, he taught me the best way to keep them cool during the long process (frozen sponges, wet towels, etc.). The island that the turtles nest on is about 9 hours from shore, so they had to spend a night. During this time they found 3 nesting female turtles that had enough eggs to collect 20 from the clutch. They aimed to collect from 5 turtles, but this was not possible, so they had to make do with what they had. The next afternoon they reached KFUPM, and at this time the eggs had to be handled very, very carefully. It is detrimental to the eggs if they are rotated, moved too fast, or have any velocity to them at all. We had to clean, weigh, and do two measurements on the eggs before putting them into the incubation chambers. The goals of the study are to find out the pivotal temperature, and see how heavy metals and pollutants affect development. The pivotal temperature experiment is what I was there for, because it relates directly to my project. The pivotal temperature is the temp at which 50% of the hatchlings are born female, and 50% are male. Temperature above this has more females and under it has more males. So, each clutch of eggs had three eggs that went into one of five incubators, at 26, 28, 29, 30, and 31 degrees.

In warmer temperatures, it is expected that the baby turtles will hatch the quickest, but probably with the most females. The cooler temperatures will take them around two months to hatch. I think it is crazy that no one has studied this topic in the Red Sea or Arabian Gulf, because the temperatures are extremely high. In most places around the world, the pivotal temperature is around 29.2 degrees, but it seems the temperature exceeds this throughout nesting season here. In addition, in other places in the world there is rain which plays a crucial role in cooling the eggs. But in this area rain is extremely rare; I think since I have been here we have had heavy rain twice and it lasts only a few minutes. There are also very minimal cooling effects from tide, and little vegetation for shading and cooling. So these eggs are put in very hot sand during incubation and that to me is surprising and very interesting. It shocks me that no one has really studied that, but I am excited to get to be one of the first researchers to investigate.

After the incubation experiment, I went to one of the researcher’s home for a delicious homecooked meal. It was also awesome to discuss science with them and get to speak with the “turtle expert” for hours. I loved hearing about the crazy remote parts of the world he has been to for work and research. I hope to travel and study the ocean for the rest of my life; that sounds like an ideal job!

After dinner, I took a taxi back to my hotel, the Crowne Plaza, which was organized and paid for by King Fahd University. It was a super fancy five-star hotel. It always shocks me how beautiful and nice the places I have stayed are while I have been at KAUST. For my Egypt fieldwork, I was at a seaside all-inclusive resort! Perks of going to school at KAUST! It is funny because I am completely fine staying at hostels or homestays, but it is a nice treat to stay at resorts as well—I am not complaining. Fun fact about hotels in Saudi: the gym and pool are men only! I was disappointed by this but there was plenty of space in my room to turn it into a gym for a bit. The buffet breakfast was delicious with tons of vegetarian and vegan options. Before I knew it, it was time to return to campus and back to work! I have a few upcoming trips planned, so stay tuned for the next few weeks. I will be heading to Thailand to meet up with my parents in a little more than a week! Then at the end of August, I am heading to Australia for a conference in Perth, and David is joining me for an adventure/road trip to Exmouth after, where the famous Ningaloo Reef is! I am so excited for these trips!

Lyndsey Tanabe (@lynds_sea) is a Marine Science PhD Student in Saudi Arabia. This story was published on July 31, 2018, on Lyndsey’s blog, adventures (available here), and has been republished here with her permission.

Why am I doing ocean research in the first place? 4 min read