What it's like to be a paleontologist mom
Getting back out in the field after cancer
Adulting in Cambridge as an international student
My fieldwork gave me 5 important lessons!
Being an ethnographer: Are we becoming friends or is this…

On fieldwork in rural Punjab: Do you see what I see? 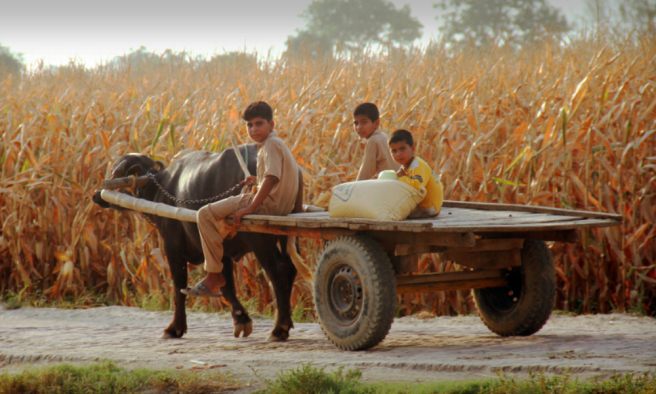 I was born and raised in Peshawar, a small city in the north of Pakistan. It is heartbreaking that Peshawar, once known as “the city of flowers,” has been torn apart in the name of terrorism. In 2014, a blood-curdling attack on a school left the city in a state of mourning that has taken a long time to fade away. The strength of the mothers who lost their children in that attack and their desire to keep sending their children to school has inspired me to do what I do today. I am a PhD researcher at the Faculty of Education at Cambridge, and my work focuses on mothers in Pakistan and the influence they have upon their daughters’ education. I seek to explore women’s lives and their circumstances in the hope of creating an in-depth understanding of the complex and daunting issues that these women face every day. I wish to shed light on the strength and resilience people show in the face of hardship.

During the summer of 2017, I conducted fieldwork in rural Punjab, Pakistan. Researchers are often warned of the “messiness” that fieldwork entails (Naveed et al., 2017). The emotional toll that this work requires is also acknowledged alongside epistemic problems of reflexivity and researcher positioning (Davies & Spencer, 2010; Moser, 2008). What we rarely consider as researchers is the way fieldwork changes us as people and sensitizes us to the social constructions that respondents hold (Gandhi, 2014). I have always been conscious of the disadvantage through which people struggle, but as a researcher in the field, I have found my understanding of social matters changing from mere narratives on an intellectual level to a truly experiential understanding. During my fieldwork, I collected data from participants in three villages of rural Punjab, Pakistan. I will share my experience from one household in one of these villages. This village was located away from the city and economic activity was close to nil. The farm land was not productive enough to support any industry, and thus, work opportunities were exceedingly scarce. There were a few orange (the fruit!) packaging factories in faraway villages, but none that these villagers could access for work. The main source of income was a few brick kilns where men, women, and children worked. Some villagers labored on farm land which was mostly owned by the village elders. The villagers were given grain at the end of each year as compensation for their work.

It was the month of August when I visited the poorest segment of this village. In the scorching heat (37 degrees), electricity outages could occur for many hours in a day. I noticed that most of the family members in the households went to work early in the morning. Some people who could afford transport would go out to the city to earn, but for women, the only option was manual work in the fields if they wanted grain, and the brick kilns if they needed money. As I interviewed these women, I soon realised that they did not have many inspirational examples of successful female role models – mostly because of the scarcity of educational opportunities. Some villagers even quoted a few examples where people had completed college and were still unemployed.

When I started interviewing the women, I was fascinated to hear about the expectations they had from education; the hope in its regenerative abilities kept them inspired to do more and to be resilient while facing the most difficult of circumstances. Many women claimed to work at the kilns so they could provide educational supplies such as school uniforms and books to their children. Naïve as I was, I found this surprising, especially considering the lack of role models in the area who could motivate people towards education. Puzzled by this thought, I couldn’t help but ask one of the mothers, “Why do you go out and work at the kilns in this scorching heat? You mentioned that any improvement in future prospects is unlikely, even after people receive education. Then why do you toil so hard to make schooling possible for your daughter, even though you feel that it will bear no fruit?” She shifted in her seat a little and looked at me with restless eyes. This restlessness was not unfamiliar to me. I had seen it in my mother’s eyes when she looked at me, no matter what stage of life I was in. As a mother, I had felt it for my daughter too. The woman took a pause and held my hands in hers, and signaling towards them, she said, “Bibi (respected lady), look. Do you see the difference between your hands and mine?” I looked at her hands, crafted beautifully by the sands of time. Every wrinkle bearing witness to hardships encountered gracefully. I thought to myself, “The answer she really seeks is to the question, do you see what I see?” As I sat there lost in thought, she continued, “This is the change that education may bring in my daughter’s life. This hope is what makes me do whatever is in my power.” She went on, “You know it is precious to me, this hope, if not a choice, for my daughter to have an option for a better life.”

I realised that exploring the lives of these people made me feel like a diligent student in a classroom, seeking to learn but at the same time feeling challenged to question known perceptions and interpret knowledge befittingly. This episode demonstrated to me how important it is to try to understand how these mothers construe education. Perhaps it was a source of hope to them, giving them a feeling of control over the fate of their children. Maybe the prospect of a better future life made them strong enough to persevere. It reminded me of Marcel’s notion of communion as an aspect of hope that Jacobs (2005) writes about:

“Seeing oneself as part of the larger social fabric of responsibility provides the impetus for people to consider how the exercise of their individual agency affects the world and the people in it. This, in turn, helps ensure that utopian goals act as spurs towards concrete action rather than as unattainable dreams.” (p. 788).

* The image in this blog post is used with the kind permission of the parents of the children.