Scientists are not always bearded men in dusty laboratories: The Life of Science 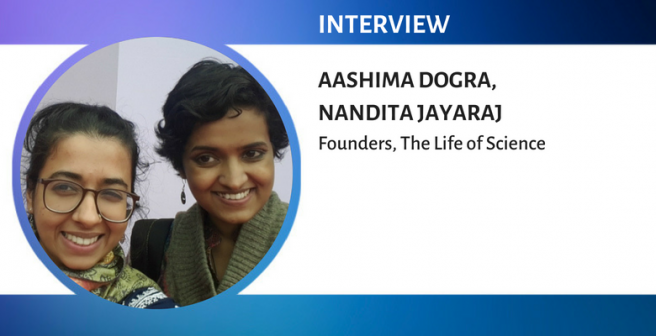 A few weeks ago, I stumbled upon an unassuming but promising website, thelifeofscience.com, and decided to explore it further. Before long I found myself reading all their posts with a lot of interest and appreciating the efforts of the two science journalists who are running this project. The Life of Science is a platform that is bent upon changing the stereotype of “the scientist as a bearded man in a dusty laboratory.”

Meet Aashima Dogra and Nandita Jayaraj, the two independent science journalists who founded the The Life of Science project in 2016 to dig deeper into the gender inequality in research in India. The platform primarily focuses on women scientists in India and documents their biographies through interviews, podcasts, blog posts, etc. The aim is to capture their experiences, struggles, and learnings; give them more visibility as scientists; and address the lack of information about scientific research being conducted in India.

In this interview, Aashima and Nandita share their journey, talk about the motivation behind thelifeofscience.com, and articulate some challenges faced by women researchers in India. They also talk about their upcoming book project that aims to document the lives of Indian women scientists.

What is the story behind The Life of Science?

The Life of Science, or thelifeofscience.com as we like to refer to it, was born out of the contemplations and conversations that took place while we were working at Brainwave Magazine, a children’s science magazine. We noticed that female role models in science were few and far in between, and those that we read about were rarely contemporary and, more importantly, rarely Indian. We decided to start a blog that would take readers into science laboratories in India to know what kinds of research projects were being conducted around the country, and what it is like to be a scientist in India. The blog would start off with a focus on under-represented genders. This would combine our passion for travel, storytelling, science and feminism. It has been exactly two years since this project started now and it’s been an eye-opening journey for us and our platform has evolved into a rich and complex repository of stories of women in science.

What are some the things you talk about or do?

Our primary activity is to travel to sites of research around India and publish reports based on interviews with women scientists. We have published these reports once a week since February 2016. These reports discuss the research being pursued by the scientists, their educational path and associated challenges, and their views on gender equality.

We aim to get these interviews on as many platforms, languages, and formats as we can. We have also created podcasts, comics, and photo-essays based on these reports.

We have recently begun to collaborate with other science communicators - many of whom are in the early stages of a career in science communication. We are giving them a space to hone their skills and contribute to the movement.

During our travels, we often accept invitations to talk at research institutes about gender equality in Indian science, thelifeofscience.com, and our own experiences as science communicators. We also have a Blog section on our platform where we invite people involved in scientific research to write about their experiences in the lab and what their journey has been like.

We have also conducted outreach activities with school children to talk about women in science and the thrills of different areas of science.

We recently tried something new. We set up a ‘Q & A Booth’ at the International Congress of Cell Biology in Hyderabad, India, where we interviewed over 30 researchers across the world and at all stages of their career and asked them to talk about their work as they would to a high school student. The idea is to get scientists to break down the complexity of science, step out of the ivory tower and reach out to the lay people. These videos are currently in production.

Is it still a pet project or is it evolving into something larger?

Well, thelifeofscience.com is definitely evolving into something larger than a pet project. We are actively looking for funding to allow us to sustain this on a more long-term basis. The outreach and impact a platform such as this could have is huge, especially considering the fact that we are helping scientists gain a lot of visibility.

Why focus on women in science?

Because women in science remain largely invisible. Very few lay people can name three women Indian scientists off the top of their minds. To us, this is unsurprising because women in science rarely escalate to stages where they are seen. Most institutions in India are headed by men – many have never had a female head in their history. Women are disproportionately and insufficiently recognised by award committees and ‘manels’ (all male panels) are aplenty. In terms of numbers, these are common trends seen all over the world, but the issues haunting India are unique in many ways and have many more intersectionalities.

What, according to you, are the top challenges faced by women researchers in India? And how could these be remedied?

If visibility is a problem for women scientists, who should be responsible for fixing it, and how?

The responsibility should be assumed by multiple stakeholders:

You have met and worked on biographies of women scientists. Do you have any interesting/inspiring stories to share with our researcher readers?

One recent interesting encounter was that of mathematician Kaneenika Sinha. She wrote a popular, then-anonymous, blog about her life in academia. Though no one knew her identity in the early years of the blog, her honest observations and experiences as faculty and briefly warden at her institute struck a chord with her peers around the country and started many dialogues about the work culture in Indian labs.

Another inspirational story that that comes to mind is that of planetary scientist Kuljeet Kaur Marhas who had to navigate the struggles of setting up her lab, even fixing a broken machine, while simultaneously playing the role of a single parent in Ahmedabad.

Did the process of talking to so many scientists bring about a change in you?

For us as science journalists, it is always thrilling to talk to scientists at their labs, which are sites of so much scientific action. Although we knew that we were feminists from the beginning of thelifeofscience.com, we were quite surprised to find out how deeply entrenched the flaws in the system are and many topics like sexism and sexual harassment continue to be taboo. Talking to these people has re-affirmed the need for gender equality in academia and the enormous loss to our country if we don’t achieve it.

In the course of your work as science communicators, did you experience any specific obstacles that could have stemmed from a gender bias?

There are many ‘boys clubs’ in the media and there have been occasions when we find that we are not taken as seriously as we should be. Issues relating to gender, in particular, are often considered by supervisors in a patronizing manner. Sometimes, we have found that we need to be more assertive in order to prove our ability.

What future plans do you have thelifeofscience.com? Where do you see the project a few years down the line?

Currently, we are working on two books on women in science in India. One is intended for children and the other for a general audience. We are also running a crowdfunding campaign to support our research for these books. We envision the books being translated to multiple languages to increase their reach. These books are unique because they will include contemporary Indian women scientists, so it is critical for these crowdfunding efforts to be successful.

Based on your interactions with women scientists, what words of advice would you have for women scientists striving to carve a niche for themselves in the competitive academic world?

This is a tough one. Since we have not really been in their shoes so we feel that we cannot advise them. We know it’s a tough life out there. Our project, thelifeofscience.com, does compile the experiences of dozens of women scientists at all stages of their careers. And these stories are truly inspirational! So we would urge researchers to read these stories and reach out to us if they’d like to talk about their scientific life or their research.

Thank you, Aashima and Nandita! I hope thelifeofscience.com achieves its goals and becomes a global platform for Indian women researchers.

Should we stay or should we go: Women in STEM on what helps them stay 5 min read

What will make it easy for women to pursue their academic goals? 5 Notable women in academia share their thoughts 6 min read