Taking open access one step further: The role of SciELO in the global publication landscape 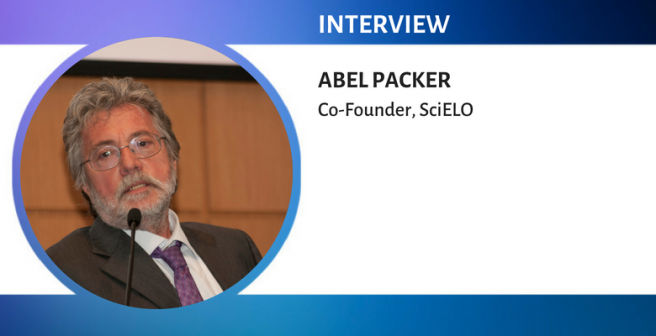 It is exciting to have a conversation with someone who is considered an influential thought leader in global scholarly publishing. In the course of my interview with Abel Packer, co-founder of SciELO (or Scientific Electronic Library Online), I realized that open access is much more than a movement. It is an effort to achieve efficient and commercially viable publication workflows without compromising on the unrestricted accessibility of research. SciELO was first set up as a project that aimed to provide greater visibility and accessibility to Brazilian research published in local journals. Over the years, it has grown to include the support and participation of 15 nations and is now a full-fledged and expanding network of countries working towards and supporting collaborative research and efficient open access publication models. In addition to providing a database of research articles, SciELO makes efforts to improve the quality of Brazilian research journals and encourages international collaboration. In this conversation, Packer traces SciELO’s growth and talks about the gap in publication standards and processes between developed and developing countries. He also emphasizes the importance of establishing sustainable open access publication models.

Abel Packer is one of founders of SciELO and current Coordinator of the SciELO/FAPESP Program and Advisor of Information and Communication in Science at Fap-Unifesp. Packer has experience in the areas of information science, librarianship, information technology, and information and knowledge management. In the course of a career spanning more than 20 years, he became increasingly involved in the movement to make Brazilian research globally visible and accessible. Using his expertise and understanding of the research publication scenarios in the developing and developed worlds, Packer has made significant contributions to SciELO’s efforts to introduce a systematic methodology to track, manage, disseminate, and evaluate published scholarly records. Today, he is considered an influential thought leader in the international open access landscape. Packer holds a Master’s degree in Library Science from Syracuse University.

Could you tell our readers a little about SciELO? When was it founded? What led you to think of this initiative?

SciELO started in 1997 as a pilot project investigating a proposal to improve the visibility of peer-reviewed journals published in Brazil. We developed the proposal with Prof. Rogerio Meneghini, through an institutional partnership between BIREME (the Latin American and Caribbean Center on Health Sciences Information of the Pan American Health Organization/World Health Organization) and FAPESP (the São Paulo Research Foundation). Our proposal discussed a new and comprehensive approach to improve the visibility of Brazilian research. We developed the visibility concept around the extent to which a journal is indexed by a recognized bibliographic index, irrespective of whether the index is multidisciplinary or subject-specific. However, when it came to measuring a journal’s performance with reference to the number of citations received by the articles it publishes, the only indicator we had was Journal Citation Reports (JCR), which used a simple, popular, and polemic indicator – the Impact Factor.

Realizing that complete reliance on the impact factor would not help our cause, we proposed three major steps to improve the profile of Brazilian journals:

We implemented the three recommendations over the period of one year. The project was a success and SciELO was launched in March 1998. Eventually, SciELO became FAPESP’s special program oriented to research infrastructure development. In terms of its methodological and technological approach, it followed BIREME’s Virtual Health Library (VHL) model for storage and retrieval, and JCR for bibliometric indicators. As soon as SciELO was launched, the Chilean National Commission for Science and Technology (CONICYT) adopted the model we proposed and set up the SciELO Chile collection. This was the beginning of the SciELO Network, which has now spread across 15 countries, publishes over 1,000 journals, and has an accumulated repository of more than 500,000 journal articles.

SciELO’s primary aim is to develop a common methodology for the preparation, storage, dissemination, and evaluation of scientific literature in digital format and to attract more attention towards the published output of the developing world and Latin American countries. The SciELO network operates on three main principles: decentralized governance and funding, quality control through the usage of a common methodology to manage publication workflows, and open access to scientific knowledge. SciELO adopted Gold open access without an embargo. SciELO Brazil functions as the executive secretariat of the entire SciELO network and is responsible for the maintenance of the methodological and technological platforms. In brief, SciELO operates as a bibliographic and bibliometric index, a portal/repository/publisher of full text journals, and a promoter of the interoperability of journals. It wouldn’t be far-fetched to say that SciELO is a meta-publishing organization.

One of SciELO’s aims was to make Brazilian research more visible to the rest of the world. To what extent has SciELO achieved this?

Several independent studies and sources confirm the accomplishment of SciELO’s objective of making Brazilian research more visible and accessible. For example, a study by Science-Metrix using the Scopus database found that, by 2014, more than 50% of the articles published between 2007 and 2012 were freely available online in some form. Over 75% of the articles produced in Brazil were available via one of the open access routes. This was more than the 70% open access rate achieved by 40 countries including USA, Canada, Japan, and Europe. The report confirms that following SciELO’s efforts, Brazil took the lead in open access publishing in the Latin American region. Also, the Webometrics Rank of Repositories ranks SciELO Brazil second in its list of top open access portals. Our own statistics show that SciELO Brazil has reached over 700,000 downloads per day.

A common perception is that SciELO’s influence is the greatest only in Brazil. Is this true? Could you tell us a bit more about SciELO’s outreach?

Certainly, the presence of SciELO is remarkable in Brazil, the country that created the program. More than 50% of the articles published by SciELO Brazil are in Portuguese. But today, SciELO operates in 15 countries (12 from Latin America, Portugal, Spain, and South Africa). All of SciELO’s content is pulled by powerful search engines like Google Scholar. About 45% of all SciELO journals are indexed in Scopus or Web of Science. (In the case of SciELO Brazil, this proportion is 65%). All these facts indicate that SciELO has a significant international presence. And given the pace with which scientific knowledge is growing, the internationalization of SciELO is inevitable.

In one of your papers, you say that open access is not only about access to published scholarly works, and “open access can also mean access to the means of producing visible and recognized journals.” Could you elaborate on this?

Yes. We cannot always talk about open access in the strict sense of open access research articles. There should be equal emphasis on setting up sustainable and efficient open access publishing models. The wide availability of publishing related products, services, and solutions is a critical factor that will boost the development of open access. Better availability of published output will help build a competitive market oriented to the production of high quality journals that lie outside the confines of commercial publishing. Eventually, we will also see how publication standards and recommended best practices for open access will drive different aspects of publishing, from manuscript preparation to the interoperability of manuscripts. Again, this will help improve the openness of science and introduce a competitive and innovation-based publication market. So, beyond making papers freely available, better and more sustainable open access publication models need to evolve. This is the true spirit of open science.

Publishers typically ask for publication embargoes to help sustain their business, including managing their publication staff, editors, typesetters, etc. SciELO adopted Gold OA by releasing journals without embargos. How far is such a model viable for the business of running a journal?

The Gold open access model adopted by SciELO is sustainable in that the costs of producing journals and articles are systematically managed before actual publication. In the case of SciELO-indexed journals, different sources of financial support play a part: the institution responsible for the journal, research agencies, sponsors, and the authors themselves. For example, some journals provide English translation services to authors for a charge. Similarly open access journals and publishers have to think of newer, innovative ways of sustaining their business such that they do not have to compromise on the basic premise – that of enabling the free accessibility and availability of scientific information.

Do you think there is a gap between developing and developed countries in terms of quality of research output and the publication landscape? If yes, in what areas do the differences lie? What steps should both groups take in order to be aligned?

A gap does exist in many research fields, and developing countries struggle to ensure it does not increase. Most of the science developing countries generate is communicated by the journals produced by developed countries. Assuming that the peer review system followed by journals in developed and developing countries is the same, the primary difference lies in the actual impact the articles achieve, or in terms of the number of citations they receive. That is, articles produced by developed countries get better citations than those produced by developing countries. The research communicated via local journals has lower impact in terms of citations per article than that communicated via the journals produced by developed countries. The former might be perceived as lower quality, but this perception may be due to several reasons. For example, the problems investigated in the study may have regional instead of international significance, the paper may not have been written in English, or the researchers may not have had international collaborators. The improvement of quality is a major goal in the advancement of the SciELO Program. One major step we have taken is that of ensuring that locally published journals comply with global publication standards and best practices, including workflows that ensure the transparency and quality of the editorial process. Other steps we have taken include the internationalization of journal editorial teams and process, increase in English-language publications and articles, and attracting more international author collaboration.

The theme for the 2015 International Open Access Week is “Open for Collaboration” and it aims to highlight the role of collaboration in open access. What are your thoughts on this?

Today, collaboration is essential for the advancement of research and research communication, and particularly for the progress of open access. Two major developments will help collaborative open access publishing immensely. First, the availability of a public domain or low-cost platforms for high quality journal publishing which will make the open access market more competitive and maximize content interoperability. Second, the development of a more comprehensive performance evaluation framework beyond the use of journal impact factor-like indicators, which includes, for example, the measurement of access to content. So, for me, the theme of this year’s Open Access Week goes beyond advocating open access and collaborative research as concepts. It is about introducing efficiencies to support open access and collaboration.

Thank you, Abel Packer, for these insights!

So what do you think about some of the points Abel Packer has raised? Is there a gap between developed and developing countries? How far have we come in the movement towards establishing sustainable publishing models? How can researchers increase their visibility? Do share your thoughts with us.