Increased openness is the best way to tackle ethical…
While free content is to be welcomed, the way it is paid…
We should persuade scientists to reimagine their…
Top 8 questions about open access researchers frequently ask
Academic publishing and scholarly communications: Good… 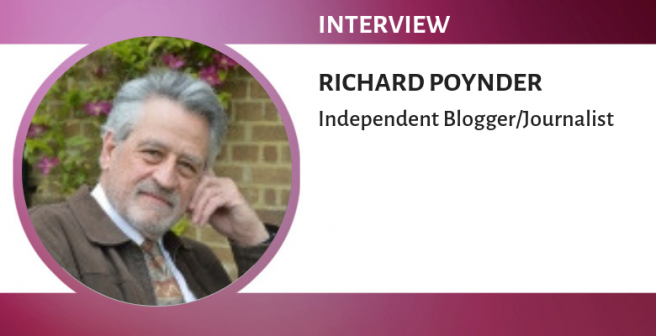 In the course of my conversation with well-known independent journalist/blogger Richard Poynder, I asked him to share his experience with accessing published research and interacting with publishers. Richard reveals that he finds it challenging to communicate with publishers and that publishers should become more accountable to their readers. Interestingly, Richard admits that even though institutional open access repositories are supposed to provide “free access,” he sometimes struggles to get access to research because of login constraints. And when asked to share his views about the theme of the 2015 International Open Access Week “Open for Collaboration,” Richard feels that collaboration is not as strong or common as it could be. There should be a centralized collaborative effort to improve the global implementation of open access.

Richard is well known for his work, most of which he publishes on his blog Open and Shut? Among Richard’s most popular publications are three series of interviews. The blog-based open-access book The Basement Interviews includes Richard’s interviews with leading advocates of the various open and free movements. The Open Access Interviews and The State of Open Access series document Richard’s conversations with open access advocates and practitioners. Richard is also moderator of the Global Open Access List (GOAL). Over the years, Richard’s work has received a lot of attention. Stevan Harnad, well-known open access activist, described Richard as the “chronicler, conscience, and gadfly laureate” of the open access movement.

While conducting research or writing posts on scholarly publishing, you have had to get in touch with a lot of academics and publishing professionals. As a layperson approaching an academic, how easy or difficult was this? Are academics easily accessible?

Generally, I find academics very receptive to giving interviews. Undertaking interviews with publishers, on the other hand, is challenging. Even if you can persuade a publisher to speak to you, getting meaningful and/or interesting answers out of them is hard. And the larger the publisher, the more difficult it is. Most view interviews as an opportunity to promote their products, not to discuss issues or answer probing questions. They also much prefer speaking to large media outfits than to lone bloggers of course, since this allows them get their corporate messaging out to a larger audience. The problem is that reporters working in mainstream media do not really understand the issues and so their questions, and their subsequent write up, are inevitably superficial and error prone.

What I find depressing is that large scholarly publishers behave as if they are not answerable to the public. Some years ago, an employee from a large publishing house told me that the only people the company needs to talk to are its librarian customers and its shareholders. Open access has changed the situation to some extent since researchers are becoming customers too but I still feel that publishers need to cover some ground here and understand that they are just as answerable to the public as researchers are now expected to be.

How about access to research? Did you find it difficult to access published research on institutional repositories or publisher forums?

I have no way of accessing published research if it is behind a paywall. And quite honestly, I find it pretty difficult to access papers in institutional repositories at times too. Open access advocates don’t like to advertise the fact, but a growing proportion of the content held in repositories is not in fact feely available. This is not just because of publisher embargoes but because universities/researchers sometimes themselves choose to put some of the content in their repository behind what one might call a “login wall.”

I have also had little success using the so-called “request eprint” button, which is supposed to moot publisher embargoes. Even leading open access advocates have ignored requests I have made via the button for copies of papers they have put on dark deposit!

What are your views on the theme for the 2015 International Open Access week - “Open for Collaboration”?

This year’s theme was chosen, SPARC explains, because it “highlights the ways in which collaboration both inspires and advances the Open Access movement — from the partnerships behind launching initiatives such as PLOS and ImpactStory, to the working relationships the community has established with policymakers that have delivered Open Access policies around the world. The theme also emphasizes the ways in which Open Access enables new avenues for collaboration between scholars by making research available to any potential collaborator, anywhere, any time.”

However, collaboration doesn't seem to be a visible strength of the open access movement. Perhaps this is not surprising given that researchers today have to compete with one another more than they ever did, despite all the talk about collaboration.

As evidence of open access advocates’ poor record on collaboration I would point out that they never created a democratic organisation, or foundation, in which to hammer out a realistic strategy for achieving open access. As a result, no coherent agreement, or pragmatic program, on the best way of achieving open access was ever developed. Indeed, there has not even been agreement on what exactly open access is! This has allowed publishers to interpret and implement open access in ways that benefit them much more than the research community.

This concludes the third part of a great interview series with Richard Poynder. In the fourth and final part, Richard shares his views on social media and citizen science.

Other parts in the series: