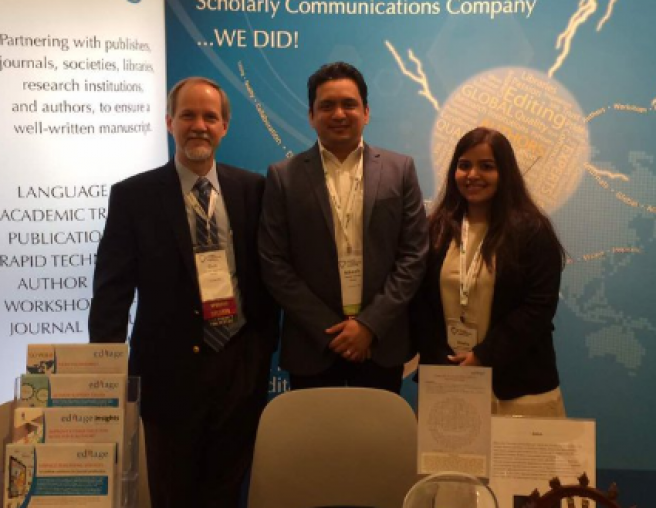 I attended the 39th annual meeting of Society for Scholarly Publishing held in the beautiful and culturally rich city of Boston, Massachusetts, from May 31 to June 3, 2017. This year’s theme was extremely relevant to the current discussions in the scholarly community: “Striking a Balance: Embracing Change While Preserving Tradition in Scholarly Communications.” As a first-time attendee, I was excited to be a part one of the biggest conferences (with more than 1000 participants) that included several insightful plenary discussions, informative sessions by the sponsors, ample opportunities to network, and an exhibitor marketplace that would acquaint me with innovative products and services. Editage was one of the sponsors of the conference, and we had a booth in the exhibitors’ marketplace. We also hosted a session to share the preliminary results of a large-scale survey we conducted this year to understand author perspectives on publication process.

May 31 kicked off with concurrent pre-meeting seminars that promised to set the tone for the rest of the conference. These sessions ranged a broad spectrum of interesting topics, which included interesting issues such as discoverability of content, how publishers manage difficult editorial situations, how publishers and librarians are dealing with the problem of predation and piracy, and many more.

Since the sessions were concurrent, I could only attend one of them and that was a tough choice to make! I chose to attend “Predators, “pirates” and privacy: Publishers and librarians explore new challenges in scholarly communications” because I was keen on understanding the current and upcoming trends in data and content protection. I was thrilled to be meeting the esteemed panelists, which included David Crotty, Oxford University Press; Michael Levine-Clark, University of Denver; Kathleen Berryman, Cabell’s International among others. Some of the topics discussed were the increased usage of Sci-Hub, what motivated users to look up to pirated sources for information, and the need to promote the importance of accessing content through authentic channels.

This session was followed by a lunch, which allowed for a lot of interaction. Soon after this, the sessions by the sponsors commenced. I attended a session by Cabell’s Anaytics’ titled “Quality vs legitimacy.” Soon after this, Donald Samulack, President of the U.S. Operations for Editage/Cactus Communications, presented a session “Helping publishers get closer to authors: Perspectives from a global survey of academic authors” in which he discussed the author perspectives on various aspects of journal publishing, such as journal communication, time to publication, publication ethics, and open access based on a survey by Editage in which more than 5000 respondents had shared their opinion. The anticipation to be privy to the survey results was high among the attendees, and the session was well-attended.

Some of the interesting outcomes that Donald discussed were:

How authors choose a journal for their manuscript @samulack #SSP2017 pic.twitter.com/hAb9FL6hVW

After these sessions, everyone refreshed themselves with some coffee and got ready to listen to the keynote speech that was to be delivered by Paula Stephen, Andrew Young School of Policy Studies, Georgia State University. She addressed one of the most pertinent challenges of entering a career in research. Everyone in the room heard Paula with rapt attention as she spoke passionately about her views on academia and the trends she perceives for academia.
Related Infographic

Make the most of 2017: Expert tips for researchers at all career stages
As you brace yourselves to face a new spate of…
1.3k
This was followed by one of the most exciting events of the conference – speed networking. The participants of this session were seated in pairs and were given four minutes to introduce themselves to each other. At the end of the fourth minute, the moderator blew a whistle, which was an indication that the pair moved on to meet the next person. I got acquainted with several people whom I might have found difficult to connect with otherwise and was able to continue my conversation with them all through the next few days. Everyone who was part of speed networking session declared it to be one of the most fun and successful sessions of the day.

Here are some of the tweets that capture the events and discussions of the day:

Published reports suggest scientists are unable to reproduce up to 80% of the results in published studies #SSP2017 https://t.co/fo2KrjUweF

Some great pointers by Paula Stephen on what academe should expect #ssp2017 pic.twitter.com/F2G2dpKPC9

The stimulating first day of the conference ended on a high note with an opening reception which was rich with discussions of the day’s events. It definitely set a great tone for the upcoming days of the conference. Although I felt tired at the end of the day, I was already looking forward to the next day.

How to network at a conference
Networking is an extremely important part of attending…
16.7k

Please check the next part of the report in which I relate the events from the next two days.