A day in the life of a trans PhD student 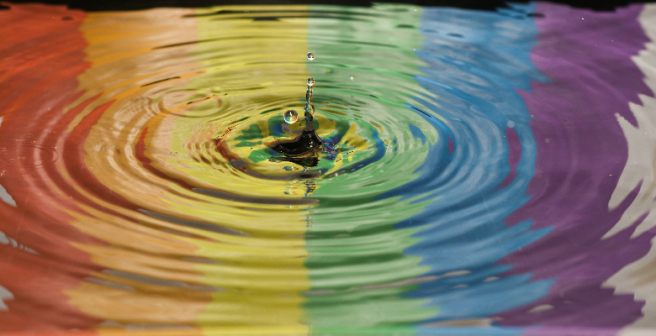 Since I began my program in August, my weekdays have remained pretty consistent: class, then lab, and then time at home. But my days are met with frequent hiccups that single out my experience from others in my cohort, and can leave me anxious, dysphoric, and needing to take breaks in a quiet place.

Upon waking up, I immediately feed my cat and decide what to wear, aiming for clothes that will minimize the size of my chest. In winter in California, this is pretty easy to achieve with sweatshirts and multiple layers, but I still occasionally use my binder. This is mostly to get me accustomed to it for when spring and summer make jackets and layers unbearable. I grab my badge that says my correct name and has a taped-over post-it with my pronouns on it, and head to class.

Each week we have a new professor, and whenever I answer a question or participate in a discussion, I wince. This is not only because I, as an anxious person with imposter syndrome, am afraid of getting the answer wrong, but also because the professor may expand on my answer and refer back to me, misgendering me the whole time. Since the professor leaves at the end of the week, it’s almost futile to correct them, since the situation will just repeat itself the following week. Besides, having my classmates constantly hear me correct people likely distances them from me even more than they already are. For many in my cohort, I’m the only non-binary person they’ve ever known—perhaps the only trans person too—and it seems to be a divide they don’t want to bridge in order to get to know me.

Every so often, there’s a form to fill out. And if it’s not specifically a form I’ve already seen and corrected (which is likely, since I’m not usually required to fill out the same form twice), I’m met with the prospect of having to disclose my gender assigned at birth, since there is no option other than male or female. In the past, I’d just suck it up and check the box for my assigned gender; now, I check both boxes and add a third saying “nonbinary.”

I check my email, and along with the usual announcements, some emails from Payroll pop up. They address me using my birth name, despite my email address in the address book listing my proper name. It seems some people, including professors seeking me out for rotations, choose my birth name on purpose, seeing my proper name and assuming the two are interchangeable. I experience this almost every day with service people asking for my name, from rideshare drivers to restaurants, and then asking if it’s short for something. I used to say yes and tell them my birth name, but now I only do if the person seems threatening.

Usually, about once per class, I head to the nearest bathroom, since few people other than students typically use it, and therefore during class it’s pretty desolate. I used to use it before or after class, but it’s typically much busier then with people other than my classmates, and the staring and double takes when I entered the room or left a stall got to be too much. I asked the administrative office for a map of single-user (and therefore gender-neutral) bathrooms, but it’s been months with no reply. It’s just as well; I usually need a break from lectures anyway, especially when I have panic attacks.

Finally, I arrive in the lab, where I’ll spend six or seven hours before being able to go home. This is my last rotation and the first lab where the PI and all the students and research assistants use my proper pronouns. Depending on the day, I sometimes retreat to the bathroom a few hours in to take off my binder and switch it out with something more comfortable. This lab also happens to be associated with the only gender-neutral bathroom I’ve found on campus, and I no longer feel like I need to wait until I go home or perfectly time my visits to use the bathroom comfortably.

While the school and people in my program have made some attempts to make me feel comfortable—changing my name in the system, usually acknowledging my pronouns, and changing forms to add genders other than male or female—much needs to improve. And that’s not just in my program; it’s in STEM as a whole. In my program of roughly 100 individuals, I know of only two other people who have same-gender partners. Fortunately, one of them is in the same lab I’m rotating in, and her anecdotes about her partner make me feel comfortable enough to talk about mine, even in front of the PI. She also asks me respectful questions about my relationship—many of my classmates have avoided this—making not just me but also my queerness feel accepted and welcomed into the general conversation and environment of the lab. In past rotations and among my classmates, I was made to feel like talking about my relationship was broadcasting how gay and trans I was, rather than merely participating in a conversation about relationships. Back in my undergrad, I never revealed to my mentor of five years that I was gay or trans, fearing his reaction.

An additional qualm, which my scientific writing class recently tried to address (to my abject shock) is the frequent misconstruing of gender and sex when talking about scientific studies. I read many scientific papers from many fields of biology every week, and they are often discussed in class. Since gender is a social construct, and we haven’t yet found that animals other than humans have an internalized concept of gender; in my opinion, it’s perfectly reasonable to refer to a mouse or other non-human specimens in studies as male or female. This doesn’t hold true for human studies. I can’t tell you how many times I’ve had panic attacks during paper discussions where those terms, as well as “opposite sex” and “opposite gender,” were thrown around. One time, students laughed at a study where mammary epithelial cells from AMAB (assigned male at birth) people were engineered to express milk, apparently thinking that men expressing milk was comical. That same class, a professor referred back to the mammary epithelial cells as “these guys” before adding “or should I say these girls,” while laughing. These jokes weren’t even biologically accurate: all people have mammary epithelial cells and are capable of producing milk; it just isn’t often that AMAB people do.

These are just a few examples of the discomfort and anxiety I experience every day in grad school, and I know that STEM graduate programs and STEM as a whole has a long way to go before all trans, GNC (Gender Non-Conforming), and queer people will feel comfortable participating in these fields. I can only hope that by the time I graduate and start my postdoc, things will be a little better.

Bask Biology is the pseudonym of a first-year PhD student in Southern California. Bask is pursuing a PhD in biology and hoping to specialize in DNA Repair. Their passions also lie in epigenetics, genetic conditions, and LGBTQ+ rights. Outside of navigating grad school as a non-binary student, they enjoy spending time with their partner and their emotional support cat. This story was published on February 28, 2019, on Bask’s blog Enby PhD, (available here), and has been republished here with their permission.