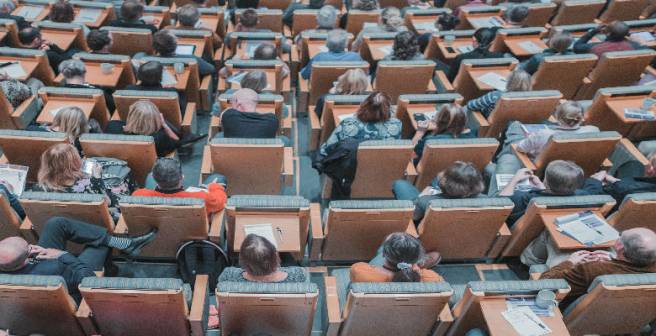 On September 3, 2014, Editage conducted a full-day workshop on scientific writing and editing for over 70 professional English editors in China. The workshop was organized by Science Press and Science China Press (China’s largest STEM publishers).

The full-day workshop was hosted by Dr. Shengli Ren (Editor-in-Chief, Science China Press) and was conducted by John McDonald from Editage. John covered a broad range of topics, from basic skills in English paper writing to the structure of a scientific paper. He also shared the latest research trends and engaged participants through a variety of training exercises. Participants included professional English editors from Science Press, Science China Press, China Higher Education Press, and journals affiliated with the Chinese Academy of Sciences (CAS).

The workshop received an encouraging response. The participants listened attentively, took notes, and interacted with John actively. The general feedback was positive, with participants stating that they found the workshop contents very relevant to their professional lives and that they would be interested in participating in similar sessions conducted by Editage in the future.

Among the workshop participants was the 81-year-old Dr. Shen Yu from the Institute of Engineering Thermophysics, CAS. Dr. Yu is the editorial member of the International Journal of Turbo and Jet Engineering, has been featured by the International Biographical Center, and has been recognized as one of the 2000 impactful research leaders in the world by the American Biographical Institute. Dr. Yu’s enthusiasm for learning has been a source of inspiration for young researchers and editors. His feedback for the workshop was positive:

The atmosphere of the workshop was great! Professor McDonald has an excellent style of teaching. He covered a range of aspects of scientific writing, yet his content provided in-depth knowledge on each topic discussed. In addition, his perspective and insights as an advanced level writer proved to be very helpful.

The workshop focused on the importance of sentence structure and manuscript structure because they play an important role in scientific writing in Chinese as well as English. I also feel that Chinese authors writing in English should focus on the use of conjunctions. John also helped us think from a reader’s perspective – an aspect that is easily overlooked by authors and editors.

At Editage, our mission is to help improve the quality of academic papers written by researchers from across the globe, thereby enabling the dissemination of scientific knowledge. In China, we hold workshops for authors on research writing and publication; we also organize training events for academic journal editors on scientific writing in English, understanding style manuals, and international publication policies and standards. In addition, we can help organize exchange activities between Chinese and international journals. Through these efforts, we aim to improve the quality of research papers published in Chinese academic journals, to promote the internationalization and dissemination of science and technology, and to enable Chinese scientific researchers gain recognition in and disseminate their findings to the global research community.

Science Press Ltd., the core member of China Science Publishing Group, is the largest comprehensive STEM publisher in China. According to the “2008 Compilation of Statistical Data of China's Press and Publication” (issued by Financial Department of China's General Administration of Press and Publication), Science Press takes the lead among China’s STEM publishers in terms of annually published titles and their total list prices. Science Press publishes over 6000 books every year as well as the largest number of high-quality STEM journals. Since its foundation in 1954, Science Press has published more than 300 academic journals and released over 32000 issues.

Science China Press Co., Ltd. (SCP) is a scientific journal publishing company of the Chinese Academy of Sciences (CAS). For over 60 years, SCP has been fulfilling its mission to showcase the achievements of Chinese scientists from the natural sciences on a global platform.

By working closely with scientists, pursuing highest quality, and using the latest and most advanced technologies, SCP has led journal publication and dissemination in China. By establishing an efficient network of peer-reviewers, editors, marketing professionals, producers, and distributors, SCP has become the preferred choice of Chinese researchers looking to publish their findings in a journal.

SCP publishes 16 academic journals, 8 of which are in English. These journals are sponsored both by CAS and the National Natural Science Foundation of China (NSFC).