How can science editors keep up with the industry's rapid evolution? Easier than you think! 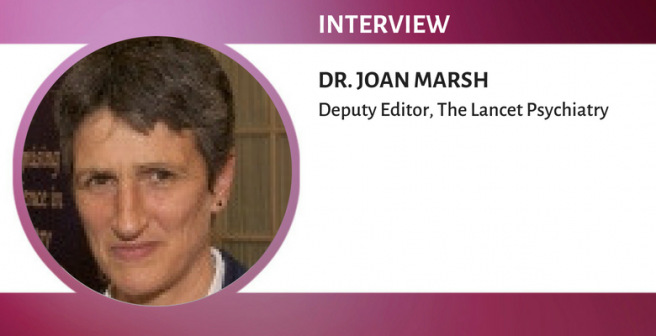 Dr. Joan Marsh is President of the European Association of Science Editors (EASE), a community of individuals from various backgrounds, linguistic traditions, and professional experience, who share an interest in science communication and editing. She is also Deputy Editor of the newly launched journal The Lancet Psychiatry. She read Natural Sciences at the University of Cambridge and then obtained a PhD from the National Institute for Medical Research in London. Joan learned to edit while working for seven years as a science editor for the Ciba Foundation in London. During this time, she joined EASE and became interested in teaching science writing, which she subsequently pursued during two years while travelling in Malaysia, Thailand, and Vietnam. Joan then worked for Excerpta Medica in Hong Kong for two years before returning to London and joining John Wiley & Sons as a book commissioning editor, where she stayed for fourteen years, finishing as an Associate Publishing Director.

In our interview, Dr. Marsh describes the exciting work of EASE, the resources they provide for the development of editors, and why The Lancet Psychiatry is a refreshing beginning for psychiatry.

Can you give us an overview of the role EASE plays in strengthening science editing in and outside of the European region?

EASE produces a variety of resources to help editors and, in some cases, authors. Our quarterly journal, European Science Editing, publishes original research, essays and other articles of interest to editors. There is also an online Editors’ Bookshelf, summarized in each issue of the journal, that alerts members to books and journal articles relevant to science editing. EASE has an active online forum, where people can ask other editors for advice or assistance. Our Guidelines for Authors, which provide clear, simple instructions for people starting their publishing careers, are now available in 22 different languages.

EASE organizes regular conferences at which members can learn about good editorial practice and the latest developments in science editing, and interact with other editors. These are complemented by workshops addressing specific topics such as statistics; running a journal; language editing; and the latest, courtesy of Sun Huh and the Korean Council of Science Editors, on IT tools in journal editing.

How can authors, editors, and others outside of the European region benefit from EASE?

People from outside Europe are welcome to join EASE: there are no geographical restrictions. Many of our resources are freely available online, including European Science Editing after six months.

Two years ago, the program of EASE Regional Chapters was launched. So far, Chapters have been formed in Mexico, Russia, Croatia, and Italy. How did EASE become interested in such a program? How and why does a region become a Regional Chapter?

The proposal for Regional Chapters came from Ana Marusic, the current Vice-President of EASE. There are many editors of science and medical journals in Croatia who would benefit from meeting, sharing information, and generally learning from each other, but who cannot afford full membership of EASE and/or to travel to EASE conferences outside Croatia. The idea was therefore to facilitate regional meetings within Croatia, under the EASE umbrella, which raises the profile of local meetings, helping people to obtain funding or other support to organise or attend such meetings. We therefore launched the Regional Chapters programme at our conference in Tallinn, Estonia, in 2012. We offer a dedicated page on the EASE website and other assistance where we can, but no financial support.

There are no firm guidelines for the structure or activities of a Regional Chapter. The Russian chapter is formed of independent editors who work in different cities with limited resources and therefore have little history of collaboration but are starting to try and work together. In contrast, the Mexican chapter comprises members of AMERBAC, the Mexican Association of Biomedical Journal Editors. They are now translating abstracts from European Science Editing into Spanish, which is an exciting new development.

Can you describe to our readers the EASE Sponsored Membership Scheme and what prompted EASE’s interest with developing regions?

EASE has had a sponsored members scheme for longer than I can remember. The scheme relies on the generosity of existing members who are willing to pay for another individual to be a member of EASE.  We clarified the criteria a few years ago to try and make best use of the opportunities we have for sponsorship. The idea is to support someone as a sponsored member for 2-3 years to enable them to improve their knowledge and skills. After that, we hope that they can afford to pay their own membership or justify the cost to their employer by demonstrating the benefit they have gained.

EASE is committed to supporting science editors with resources they can use and it already produces several tools. How do you stay ahead of the curve to identify the need of the hour?

Basically, we rely on our members to suggest initiatives that EASE should support.

Our latest initiative is the work of an active Gender Policy Group led by Shirin Heidari. They have been working for almost two years on the preparation of Common Standards for both authors and editors.  Authors will be recommended to include detailed data on the sex of their research subjects (people and animals). Editors will be given guidance on ensuring that papers do include such data, where relevant. Staff at journals and societies will be encouraged to include more women as peer reviewers, members of editorial boards, invited review authors, etc.

Any other resources or trending topical discussions in the pipeline that you are excited about?

At the EASE Conference in Split (June 13-15, 2014), Pippa Smart ran a session on continued professional development for editors. This is the first time we have organized such a session. There were several good presentations so something may develop from this.

Given the various types of editors who make up a large portion of EASE’s membership, what does EASE offer that caters to these different groups?

According to the results of our membership surveys, most members see European Science Editing as their most important benefit. Within the journal, different people like different sections, reflecting their different interests. For the freelancers, the opportunity to interact with other editors, either online or at meetings, is important. For others, it’s very useful to be able to cite EASE when dealing with authors or university boards regarding questions of authorship or plagiarism.

EASE is one of the few forums that offer interaction among an integrated pool of those associated with science journals in some way. Can you tell us what, if any, are the benefits of such a space?

Science publishing has seen many changes in the past 20 years and continues to evolve. EASE offers an opportunity for editors to learn from each other, for those working at small journals to hear about developments in the major publishing houses, for freelancers to interact with those working for publishers, and for editors in different disciplines to hear about what is happening in other subject areas.

Outside of EASE, you also serve as the Deputy Editor of the new journal Lancet Psychiatry—launched in June of this year. For readers who will need to know about this publication, can you tell us a little about it—why is it “a fresh start for psychiatry?”

The Lancet see mental health as one of the most important topics within medicine as demonstrated by two recent Series on Global Mental Health. The Lancet Psychiatry will enable the group to publish more research in this area, as well as expert reviews and informed comment to put the research in context, thereby helping to improve services and the lives of all those affected by mental disorders.  The Lancet Psychiatry is an independent publication, not linked to any society or interest group, which allows it to cover all sides of a given topic. For example, our first issue contains three reviews on suicide, addressing the neurobiological basis, the psychological aspects and the social implications of bereavement by suicide. Psychiatry is sometimes divided by arguments about the relative merits of biological, psychological or social treatments: The Lancet Psychiatry will cover all of these.

Having served as a Science Editor, Deputy Editor, Associate Publishing Director, and President of an association for science editing, what advice do you give to science editors looking to either develop their skills or maintain quality performance in order to serve authors better?

Read good writing: both classic authors such as George Orwell and well-written/edited publications such as The Economist. Keep up to date with developments in the field, through membership of an editors’ association. Attend meetings and workshops where possible. Always be open to new ideas but be critical: don’t follow every latest trend. Have fun!

How can science editors keep up with the industry's rapid evolution? Easier than you think! 8 min read