Making sacrifices and muddling through: Life as a PhD parent 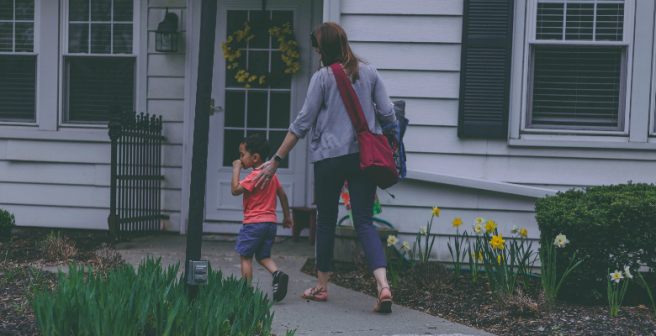 This is the clearest memory I have of the first eight weeks of my daughter’s life: I am standing at the kitchen counter, my child nestled close to my chest in a carrier. She is sleeping, her tiny mouth ever so slightly open, the hot puffs of her breath touching my skin. I can hear my son’s shrieks of glee coming from the other room. He is watching a video, but I know that soon I’ll hear his bare feet on the floor and feel his presence at my side. In front of me, resting on the counter is a laptop. I bounce and sway as my daughter sleeps, because it is the only way that my daughter will sleep, and as I move, my hands fly across the keyboard, moderating discussion forums and marking reading responses. The video is too short. Her nap will be too short. There is never enough time.

It is not a memory of any one day, but rather a memory of every day. When my daughter was born, I was, quite literally, in the middle of teaching a third-year course online – she arrived almost exactly halfway through the semester. I could have gone on maternity leave, but the union rules for sessional lecturers at my institution meant that anyone who filled in for me while I was on leave would be deemed qualified to teach it in the future. If they had more seniority than I did at that point, they could even replace me in the course. So, instead, I assigned the modules whose topics best reflected my areas of expertise to the weeks that would, most likely, immediately follow the birth of my daughter, scheduled the due dates for assignments around my own looming due date, and crossed my fingers.

I got lucky. My daughter arrived on time and without complications. She proved to be an astonishingly good sleeper, one of those miracle babies who slept ten hours straight at barely a month old. I had to express milk after feeding her at 4 or 5 a.m. to protect my supply, so I’d set up on the couch downstairs and mark essays to the quiet hum of the pump. In the immediate post-partum aftermath, my body believed six hours of consecutive sleep was a full night’s rest; marking as the sun came up did not strike me as strange. Only when the course was finished and I officially started my maternity leave did I realize how I tired I was. My daughter started waking up multiple times a night the same week I went on leave. When I told her paediatrician, she wasn’t surprised. “Sometimes the babies seem to sense what’s needed from them,” she told me. “They know how available you are.”

Whenever I tell this story to full-time faculty – that I gave birth and still continued to teach – they are horrified. I tell it to demonstrate the potential usefulness of online teaching when trying to balance an academic career with raising a family, but they see it as exploitative. At the time, however, it seemed to me to be the only logical decision. I knew, as a faculty member with no permanent position, the dangers of turning down work when it was offered. I was a newly-minted PhD, with no likelihood of a tenure-track position; the previous semester I’d been teaching three courses, and in the previous academic year, I’d had no work at all. There were compelling financial reasons, too, and those two months of teaching, hard as they were, made it easier to stay home with my daughter in the year that followed. I’d also already experienced the ‘fourth trimester’ when my son was born five years earlier. I knew that the first few weeks with a new baby were a time of chaos and exhaustion, even under the best of circumstances. I’d written and recorded most of the lectures early in the semester and gambled that we would muddle through. We did… but when I look back at that summer, I wish I could remember more of it.

I have been a mother for all of my academic life. My research has only ever existed in the spaces between my children; I have never sat down at a desk in a library without having to first quiet the running list in my head of dentist appointments that need to be made, shoes that need to be bought, lost mittens, and lost moments. It is true that this divided attention makes me more efficient at using the time that I have, but it is equally true that I find it difficult to concentrate on the finer points of Tacitus’ Annals when I also need to source a Titanic cake for an upcoming birthday. I sometimes feel like I have three children, my son, my daughter, and my book (which has certainly taken the longest time to gestate). If I pour myself into any one of these, the others are left empty, and there is simply never enough of me to go around.

My children, too, have grown up knowing that “Mummy studies the Romans” and that sometimes I teach but can be home to pick them up from school, and other times (like last semester) my teaching schedule requires me to leave the house before they wake up and return after they have gone to sleep. My teaching load was only two courses, but the two institutions in two different cities scheduled them for the same day. My son made a poster with a huge sad face in the middle and the numbers 1 through 12 down the left-hand side which we hung on the wall in our kitchen. He titled it ‘Terrible Tuesdays’ and my children took turns putting happy face stickers on the numbers every week to count down to the end of the semester. Eventually the course was over and we had, once again, muddled through.

We did so, I must add, only because my husband is a tenured faculty member. This affords me the privilege of choosing to stay in the field and continue my juggling act of children and teaching and research, even when faced with a lean semester of little work. Even the postdoctoral fellowship I’ve held for the last two years – a position of relative security for those of us without permanent academic posts – would have been untenable had his circumstances been different. The fellowship required me to engage in full-time research, but the after-tax income from it barely covered the cost of childcare.

In May, I missed most of my son’s eighth birthday, just like I did his seventh, because he was born at the exact point in the year when my discipline holds its annual conference. I also missed much of my discipline’s annual conference, just as I did last year, because it was my son’s birthday. I did not spend enough time at the conference, or with my son. Both the academic and the mother in me felt dissatisfied. But it is always an imperfect balance.

Making sacrifices and muddling through: Life as a PhD parent 6 min read

Every time I threw in the towel, life would always throw it back! 6 min read