English for medical purposes in Japan - how specialists…
Advice for medical authors publishing in English
The shape of water: What water molecules look like on the…
Nobel Laureate Takaaki Kajita: In my days, nobody felt…
"Science and technology in Asia will witness an exponential…

Medical English to overcome hurdles in scholarly communication in Japan 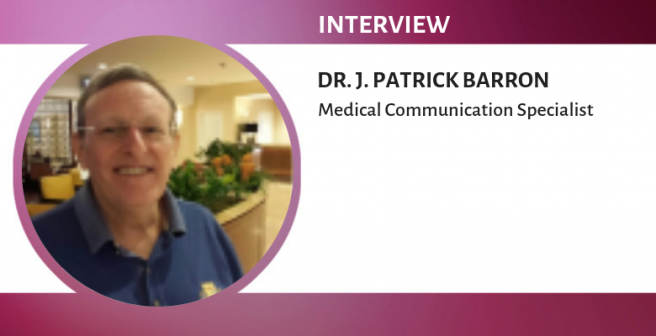 Since the late 1960s, Professor J. Patrick Barron served as a consultant to medical researchers in Japan. Revisiting early experiences of Japan's "vibrant and extremely advanced" field of lung cancer, he discusses how he and non-native English authors at Tokyo Medical University persevered to disseminate their work globally during the post-World War II era.

Born in Scotland, Prof. Barron has completed a BA in English Literature (University of Pennsylvania) and a PhD course ABD on the history of Kyogen from the University of London School of Oriental and African Studies. At the end of 1960s, before pursuing PhD studies, he completed four years of Japanese study at the International Christian University. His continued engagement with the First Department of Surgery of Tokyo Medical University since 1970 has gradually extended to other areas of the Japanese medical world.

Prof. Barron presented the session "Educational Strategies in Publication Ethics for Asian Authors" at the 2014 Council of Science Editors Annual Meeting. He presented this session along with Jing Duan, the Managing Editor of Acta Ecologica Sinica (International Journal) and Ecosystem Health and Sustainability, and Don Samulack, President of the US Operations at Cactus Communications and Editage.

You studied the Japanese language and did extensive postgraduate work on the history of medieval Japanese comic drama. How did you get associated with Medicine, a completely different field?

That is a very good question and one that I sometimes ask myself. When I graduated from the University of Pennsylvania, my degree was in English Literature because that allowed me the maximum number of electives, since I had no idea what I wanted to do for my future.  I hoped to discover something of interest among my electives. One of the electives I took was Chinese Literature in Translation and although I was interested in a degree in medicine, I was not willing to put in the huge amounts of effort some of my classmates were putting in, in order to get into med school. So, I ended up with an interest in Oriental studies, which I decided to follow for graduate work with no real idea of what would happen in the future. One of the requirements at the University of Pennsylvania for a PhD in Chinese was three years of Japanese.

I was completely supporting myself financially, because I had run away from home in Scotland when I was 15, arriving, with travel help from a sister, in the U.S. the next day.  Since the University of Pennsylvania with Harvard was the most expensive university in the United States at that time, even with some loans and financial aid, I had almost no money. The year before I graduated, in 1968, I heard that if I went to Japan, I could study Japanese during the day and teach English at night and make enough to support myself and also pay tuition. So, I decided that one year of studying intensive Japanese in Japan would be the equivalent of studying three years of Japanese in the United States. So, I decided to get the Japanese language requirement out of the way first, and therefore applied for one year in the intensive Japanese course after graduation, beginning in 1969. Barron standing at the ruined 15th century monastery, Old Abbey, in front of his house in Donegal Town, Ireland.

To support myself I took on various part-time jobs and one of my earliest was teaching a surgeon who contacted my Japanese language institution, International Christian University. His name was Professor Yoshiro Hayata and he was one of the most notable lung cancer surgeons of his day. So shortly after my arriving in Japan, I was working in a part-time capacity for Toyko Medical University (TMU) teaching English to Professor Hayata and eventually the rest of his staff. This led to my learning of how to interact with journals and how to edit, which I largely taught myself while pursuing my studies in Japanese. After an initial year of Intensive Japanese and Modern Japanese, I went on to study Advanced Japanese plus the History of the Japanese Language which intrigued me very much. So I was on a slightly schizophrenic course, studying Ancient Japanese and editing modern medical text.

You first proposed the idea of a communications center for a medical school. What triggered the idea?

When I first came to TMU to teach Professor Hayata in 1970, I had no idea that TMU was one of the two leading institutes for diagnosis and treatment for lung cancer in the country. In my last couple of years of undergraduate work, as one of my part-time jobs, I had worked sorting journals in the library of the medical school of the University of Pennsylvania. Since I did have an interest in medicine (although as I said not enough to put in the huge efforts necessary to get into medical school), I used to flip through the table of contents, etc. to see if anything of interest caught my eye. I did note that there seemed to be almost no research or scientific investigations from outside North America or the UK and I didn’t think very much of it. But, when I arrived in Japan, I realized there was a vibrant and extremely advanced level of medical diagnosis, treatment and research.

One of the difficult things about learning in Japan is that people are not given to talking much of their own achievements. So nobody at TMU mentioned that they were countrywide leaders in lung cancer and on the same level as almost any institute in the world in the field. When I saw, in 1970, one of the first bronchoscopes that had been invented and produced in Japan in the summer of 1969, I just assumed that all hospitals would have something like this. I didn’t realize that this was really cutting-edge technology and that not a single institution in North America had a flexible fiberoptic bronchoscope. As things turned out, within eight years I was already negotiating with a U.S. laser manufacturer for the long-term loan of lasers to be used via the fiberoptic bronchoscope for diagnosis and treatment of lung cancer.

Another thing I did not know for seven or eight years was that already by 1965, Professor Hayata had performed lung lobar transplantations: I think that they were the third and fourth in the world. At that time, there were no immunosuppressant drugs, and as a result both of the lungs were rejected and Professor Hayata decided that it would not be ethical to continue unless immunosuppressant drugs became available. But again, it shows how advanced Japan was and how ignorant people in the West were of these achievements because of the great difficulty the Japanese had in writing in English. Until the end of the Second World War, English was considered an enemy language and as such its teaching was forbidden, so Professor Hayata had never been taught English in his school days. I, therefore, saw that there was a huge amount of material and information that would benefit patients. I felt that I had to do what I could to try to help overcome the hurdle in communications so that later patients could benefit. My first experience with editing was almost disastrous. I was asked to edit a paper written by Professor Hayata and his colleagues on the process of rejection of the lung transplants at the cytological level; and although I knew almost nothing about the field, I did my best to make it as understandable as possible working with the authors and working on an old Olivetti portable typewriter—the kind where if you made a mistake in typing you had to retype the whole page. It was very laborious work. Six months after having sent the paper off to an American journal, we still had not received a reply, so not knowing what to do in such circumstances, I wrote to the journal asking what had become of our paper, to which we received a reply saying, “What paper? We haven’t received anything from you.” This meant producing another original and sending it off again to the journal whereupon we immediately got a response saying that the English was terrible, that it should be revised by somebody with a working knowledge of the English language, and generally, making it sound that it had been written by somebody who was totally incapable in English.

As you can imagine, I was extremely embarrassed because I had edited the paper and I held responsibility for it. After giving the matter some thought I wrote to the Editor-in-Chief with another copy of the paper thanking him for his comments but remarking that if there were problems with the English as he had stated, then it indicated that there were serious problems in the English education of the United States of America. The reason for this was that I had graduated from an Ivy League university in English Literature and I could guarantee that there were no mistakes in vocabulary, grammar, or punctuation. However, if he could be so kind as to point out what mistakes there were, I would be grateful for the opportunity of learning. We received no answer but the paper was published very rapidly.

Again this alerted me to the fact that papers coming from abroad with authors whose names indicated they were probably not brought up and trained in an Anglophone area of the world might be at a disadvantage when it came to reviewers who might have been through the war and have some negative feelings concerning authors from Germany, Japan, etc. So in 1975, I had, what I thought, was a brilliant and unique idea of a center which could help all the authors of TMU and help transmit the information to the world. When I suggested this to Professor Hayata, his brief reply was, “No money.” I felt the advantages of establishing this institution would outweigh those of any disadvantages caused by financial costs, but it was another 17 years before TMU actually established the first international medical communications center in Japan.

Read the next part of our interview with Professor J. Patrick Barron where he discusses education on "English for medical purposes" in Japan.

Note: Dr. Barron passed away in August 2019. This interview, which we conducted in 2014, is a tribute to his expertise in and passion for medical research and communication. An obituary is available here.