While walking may not seem like a burden for most people, for others, this simple task can often feel exhausting. For patients recovering from surgery or stroke, those with Parkinson’s Disease, those with restricted mobility, and even for soldiers or firemen carrying heavy loads over difficult terrain, walking or running can be a struggle. Many researchers have pondered over this problem over the years, developing a number of external devices that, once worn by users, allow them to move, walk, and run much more easily than they normally would. A variety of these “robotic exoskeletons” or robotic suits have been developed over the years, with an aim to decrease users’ energy expenditure (or metabolic rate) when walking and running. So far, however, as Prof Giuk Lee from Chung-Ang University says, “Robotic exoskeletons tend to be bulky and heavy; and while walking experiments have shown promising results, the energy spent running with the added weight of the device outweighs the benefits of robotic assistance.”

The problem, as Prof Lee and colleagues explain in their paper published in Science, lies in the fact that “Walking and running have fundamentally different biomechanics, which makes it challenging to develop devices that assist both gaits.” Tackling this challenge, the scientists showcase their newly developed exosuit, mostly made of a fabric vest, belt, and thigh wraps, just like clothes that we wear in everyday life. These components are connected by wires, and fitted with batteries and a motor-like device (an actuator). The device weighs just 5 kg, conveniently fitted around the waist to assist hip extension muscles and allow a greater range of movement. What’s more, this exosuit can switch the assistance mode automatically between walking and running gaits to achieve maximum efficiency of assistance. The scientists tested their prototype on treadmills and on outdoor courses with different terrains to examine the energy savings achieved by the exosuits in different conditions. They used an algorithm to classify gait (walking or running), which provided feedback to the device and adjusted the assistance mode accordingly. This allowed the exosuit to match the movement initiated by the actuator to the gait identified by the algorithm, and therefore to maximize energy savings. Indoor and outdoor testing revealed that the algorithm was able to correctly identify walking and running gaits more than 99.98% of the time. 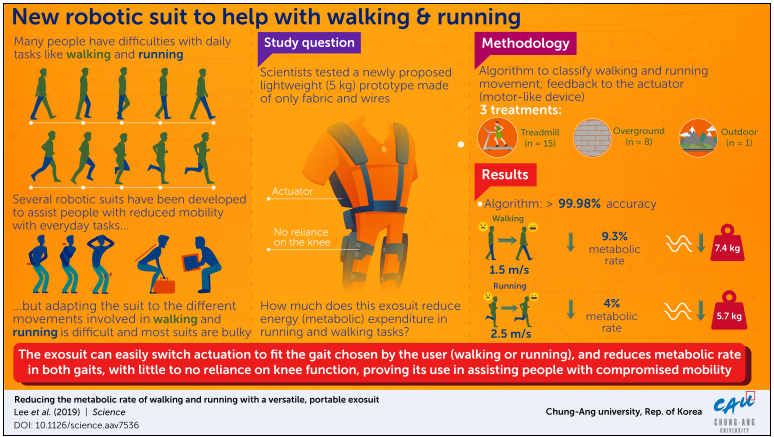 Once they had confirmed the algorithm’s accuracy, the scientists looked at the metabolic savings achieved by the exosuit’s assistance functionalities. They found that exosuit assistance decreased the energy cost of walking at a speed of 1.5 meters per second (4.8 km per hour) by 9.3%, equivalent to the user shedding off 7.4 kg. They were also successful in securing energy savings during running tasks (speed of 2.5 meters per second or 9 km per hour), where the assistance function reduced metabolic rate by 4%, equivalent to a weight loss of 5.7 kg. Such energy savings might seem insignificant, but according to Prof Lee and colleagues, “Although the changes in metabolic rate are relatively modest, they are of similar magnitude to those that have been proven sufficient to improve maximum walking and running performance. Therefore, we think that these energy savings could result in proportional increases in maximal performance, for example, over a cross-country course.” Finally, unlike previous exosuits, which relied heavily on knee function, this new device uses hip extension to drive the leg movement, making the exosuits particularly relevant for above-knee amputees and other people lacking complete knee function. By harnessing the power of the hip extension, users of this robotic suit will be able to achieve higher athletic performance in a variety of terrain, seamlessly switching between running and walking as needed.

Can authors suggest reviewers without any restriction?
I have heard that we can suggest peer reviewers when…
524

To conclude, Prof Lee says, “We are expecting that this ‘wearable robot’ will have many uses, such as in aiding rehabilitation training for senior patients and enhancing the work efficiency of soldiers or firemen. In the long term, we envision this exosuit as hanging in a closet all the time, just like the clothes we wear every day.”

Dr Giuk Lee is an assistant professor at Chung-Ang University’s School of Mechanical Engineering in Seoul, South Korea. After being awarded a PhD from Seoul National University in 2014, he worked as a senior researcher at Seoul National University, then as a postdoc at the Korea Institute of Science and Technology and Harvard University. His research interests revolve around developing wearable robotic exosuits to help people with restricted mobility achieve a greater performance. His publication record includes 14 journal articles and 21 international conference papers.