Being an academic and a solo parent
Older Japanese climbing ferns decide the sex of the younger…
2014 Nobel Prize in Physics awarded for invention of blue…
How does winning the Nobel Prize change the life of the…
How does the brain switch between wakefulness and sleep? 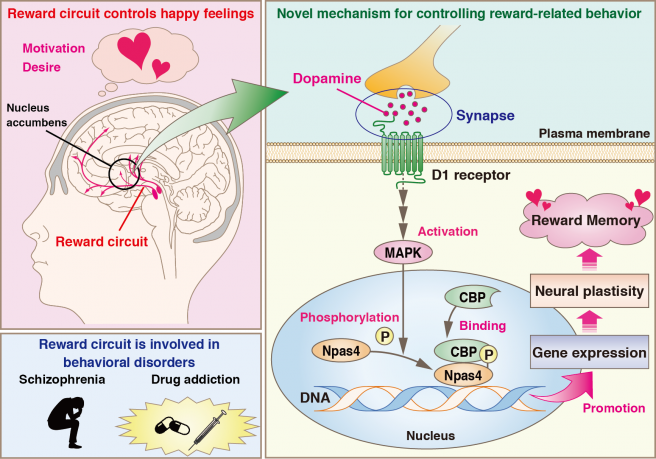 The human brain consists of several intricate networks or “circuits.” One such complex circuit, called the “reward circuit,” is involved in reward-associated learning, a process in which nerve cell activity changes in response to a “reward” stimulus (something that the brain perceives as a reward). This process is what usually causes feelings of desire and motivation, but excessive stimulus may also cause dependence and addiction.

The main regulator involved in the reward circuit is dopamine, a chemical popularly called the “happy hormone.” In a region of the brain called nucleus accumbens, this chemical targets a specific group of neurons, called the medium spiny neurons, and induces a series of molecular changes.

Unfortunately, irregularities in this pathway are associated with several behavioral and cognitive disorders, including Parkinson’s disease, compulsive behavior, autism, and schizophrenia. Drug addiction, especially to potent stimulants like cocaine and amphetamines, is also dependent on this pathway. Unequivocally, to develop effective therapies, it is important to understand exactly how the reward pathway works.

In a new study published in Cell Reports, a team of scientists in Japan, led by Prof Kozo Kaibuchi and Dr Yasuhiro Funahashi from Nagoya University, has identified a novel protein function involved in the reward circuit of the brain. They based their study on the fact that dopamine, when released in the brain, activates several proteins in response, and these proteins then cause certain changes in brain activity, such as reward-related gene expression and changes in nerve transmission or plasticity. But, how these changes happen at the molecular level was not well understood. The scientists at Nagoya University wanted to dig a little deeper. Prof Kaibuchi says, “Very little is currently known about how dopamine works in neurons to establish reward memory and cause addiction. This motivated us to pursue this study.”

What was known so far was that dopamine activates multifunctional proteins, such as CREB-binding protein (CBP), which in turn promotes gene expression through interactions with other proteins. To find more detailed information, the scientists searched for proteins interacting with CBP in mice that experienced a conditioned reward. Using protein interaction-based experiments and database analyses, they successfully identified many such proteins. Of these, one protein, called Npas4, a “transcription factor” (a protein that binds to specific DNA sequences and regulates transcription from DNA to mRNA), was known to function in reward-related learning, and so the scientists moved on to find out its mechanism.

Podcast
5 Situations in which authors withdraw their manuscript from the journal
Often, authors come across situations in their…
2.9k views

In a first for the scientific community, the group showed that a protein kinase called MAPK adds a phosphate group to Npas4 (a well-known intracellular process called phosphorylation, which “activates” proteins to carry out their functions), thereby facilitating its interaction with CBP. The scientists even identified the exact sites where MAPK phosphorylates Npas4. Moreover, they found that dopamine activates Npas4 in striatal medium spiny neurons, and so promotes the expression of genes related to “neural plasticity” (changes in neural connections). Thus, the three dopamine-stimulated proteins CBP, MAPK, and Npas4 interact with each other, leading to profound neural changes—Dr Funahashi and Prof Kaibuchi had unraveled a major mechanism of how dopamine affects the brain.

To investigate the function of Npas4 in reward-related behavior, the scientists then “knocked out” or inactivated Npas4 in the reward circuit neurons of mice. These mice and normal mice learned to expect a cocaine reward in only one of two chambers, after which chamber preference was measured. Compared to normal mice, the Npas4-deficient mice showed a >50% reduction in drug-seeking behavior, indicating a significant reduction in reward memory. Importantly, the drug-seeking behavior was restored after exogenous administration of Npas4 but not by phospho-deficient mutants of Npas4. This was exciting, as it confirmed that Npas4 and its phosphorylation play an important role in reward-related behavior.

These unprecedented findings by Prof Kaibuchi and his team shed some light on the pathways involved in the reward circuit of the brain. Faulty functioning of the reward circuit is seen in various neuropsychological and cognitive disorders. By explaining in detail, the function and reward-associated mechanism of Npas4, these scientists have paved the way for new, effective therapies. Talking about the applications of the study, Prof Kaibuchi says, “Our study can help develop treatments for neuropsychiatric disorders such as schizophrenia. It can also be useful in tackling addiction to or dependence on cocaine and other stimulants.”

Could a reward for this exciting study come in the form of a potential new treatment for behavioral disorders? Only time will tell. But, Prof Kaibuchi’s team and their study certainly offer hope for the future.

Dr Kozo Kaibuchi is a Professor of Cell Pharmacology at Nagoya University, Japan, and the Director of the Institute for Comprehensive Medical Science, Fujita Health University, Japan. He is also the corresponding author for this study. A respected and senior researcher, he has more than 650 research publications to his credit. His chief areas of research include Rho family GTPases and the molecular pathogenesis of psychiatric disorders.

Dr Yasuhiro Funahashi is an Assistant professor at the Nagoya University, Graduate School of Medicine. He is the first author of this study. Having more than 25 papers to his credit, Dr Funahashi’s chief areas of interests include cellular neuroscience, molecular neuroscience, neuron culture, synaptic transmission, neuropharmacology, and neuron-glia interaction.

Nagoya University has a history of about 150 years, with its roots in a temporary medical school and hospital established in 1871, and was formally instituted as the last Imperial University of Japan in 1939. Although modest in size compared to the largest universities in Japan, Nagoya University has been pursuing excellence since its founding. Six of the 18 Japanese Nobel Prize-winners since 2000 did all or part of their Nobel Prize-winning work at Nagoya University:  four in physics - Maskawa and Kobayashi in 2008, and Akasaki and Amano in 2014  - and two in Chemistry - Noyori in 2001 and Shimomura in 2008. In mathematics, Mori did his Fields Medal-winning work at Nagoya University. A number of other important discoveries have been made at Nagoya University, including the Okazaki DNA Fragments by Reiji and Tsuneko Okazaki in the 1960s; and depletion forces by Asakura and Oosawa in 1954.