Researchers develop a new α-gel that can revolutionize…
A powerful catalyst for electrolysis of water that could…
Innovative thinner electrolyte can improve functioning of…
New water-based optical device revolutionizes the field of…
Charge change: How electric forces vary in colloids

The shape of water: What water molecules look like on the surface of materials 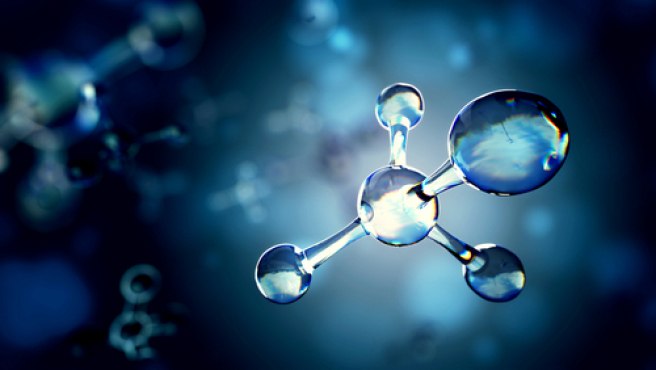 Understanding the various molecular interactions and structures that arise among surface water molecules would enable scientists and engineers to develop all sorts of novel hydrophobic/hydrophilic materials or improve existing ones. For example, the friction caused by water on ships could be reduced through materials engineering, leading to higher efficiency. Other applications include, but are not limited to, medical implants and anti-icing surfaces for airplanes. However, the phenomena that occur in surface water are so complicated that Tokyo University of Science, Japan, has established a dedicated research center, called “Water Frontier Science and Technology,” where various research groups tackle this problem from different angles (theoretical analysis, experimental studies, material development, and so on). Prof Takahiro Yamamoto leads a group of scientists at this center, and they try to solve this mystery through simulations of the microscopic structures, properties, and functions of water on the surface of materials. 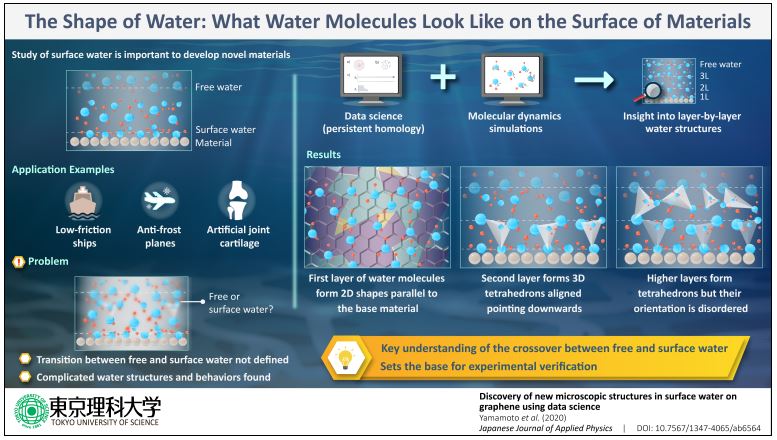 For this study in particular, which was published in the Japanese Journal of Applied Physics, the researchers from Tokyo University of Science, in collaboration with researchers from the Science Solutions Division, Mizuho Information & Research Institute, Inc., focused on the interactions between water molecules and graphene, a charge-neutral carbon-based material that can be made atomically flat. “Surface water on carbon nanomaterials such as graphene has attracted much attention because the properties of these materials make them ideal for studying the microscopic structure of surface water,” explains Prof Yamamoto. It had been already pointed out in previous studies that water molecules on graphene tend to form stable polygonal (2D) shapes in both surface water and “free” water (water molecules away from the surface of the material). Moreover, it had been noted that the probability of finding these structures was drastically different in surface water than in free water. However, the differences between surface and free water have to be established, and the transition between the two is difficult to analyze using conventional simulation methods.

Considering this situation, the research team decided to combine a method taken from data science, called persistent homology (PH), with simulations of molecular dynamics. PH allows for the characterization of data structures, including those contained in images/graphics, but it can also be used in materials science to find stable 3D structures between molecules. “Our study represents the first time PH was used for a structural analysis of water molecules,” remarks Prof Yamamoto. With this strategy, the researchers were able to obtain a better idea of what happens to surface water molecules as more layers of water are added on top.

When a single layer of water molecules is laid on top of graphene, the water molecules align so that their hydrogen atoms form stable polygonal structures with different numbers of sides through hydrogen bonds. This “fixes” the orientation and relative position of these first-layer water molecules, which are now forming shapes parallel to the graphene layer. If a second layer of water molecules is added, the molecules from the first and second layers form 3D structures called tetrahedrons, which resemble a pyramid but with a triangular base. Curiously, these tetrahedrons are mostly pointing downwards (towards the graphene layer), because this orientation is “energetically favorable.” In other words, the order from the first layer translates to the second one to form these 3D structures with a consistent orientation. However, as a third and more layers are added, the tetrahedrons that form don’t necessarily point downwards and instead appear to be free to point in any direction, swayed by the surrounding forces. “These results confirm that the crossover between surface and free water occurs within only three layers of water,” explains Prof Yamamoto.

The researchers have provided a video of one of their simulations where these 2D and 3D structures are highlighted, allowing one to understand the full picture. “Our study is a good example of the application of modern data analysis techniques to gain new and important insights,” adds Prof Yamamoto. What’s more, these predictions should not be hard to measure experimentally on graphene through atomic-force microscopy techniques, which would, without a doubt, confirm the existence of these structures and further validate the combination of techniques used. Prof Yamamoto concludes: “Although graphene is a rather simple surface and we could expect more complicated water structures on other types of materials, our study provides a starting point for discussions of more realistic surface effects, and we expect it will lead to the control of surface properties.”

Infographic
A look at the conventional journal publishing workflow
This infographic depicts the journey of a manuscript…
5.8k views

About Professor Takahiro Yamamoto from Tokyo University of Science

Takahiro Yamamoto has been with the Tokyo University of Science since 2003, when he joined as a research associate in the Department of Physics. Since then, he progressively climbed until obtaining the title of Professor at the Departments of Liberal arts (Physics) and Electrical Engineering. He now manages his own lab group, who focus on using quantum theoretical simulations to understand the physical properties of materials. In addition, he works at the Water Frontier Science and Technology Research Center, where he is the leader of a research group that aims to understand the properties of surface water through theoretical studies and simulations.

This work was supported in part by Grants-in-Aid for Exploratory Research (Nos. 17H02756 and 16H02079) from the Japan Society for the Promotion of Science (JSPS). This work was also supported by the Ministry of Education, Culture, Sports, Science and Technology (MEXT) under the Program for the Strategic Research Foundation at Private Universities, 2015–2019.