The open systems we develop should be inclusive, equitable,…
The advantages and disadvantages of the digital boom in…
Swedish consortium refuses to renew contract with Elsevier…
Understanding open access publishing and its chances for…
8 Publishers to disclose pricing details as part of a Plan…

A new coalition to organize and advance library-based publishing groups 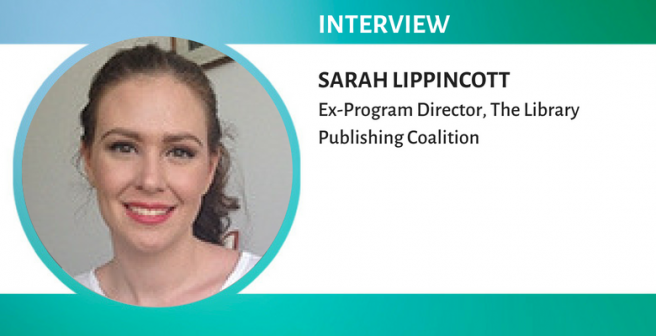 Early-career librarian Sarah Lippincott plans and manages operations for the Library Publishing Coalition (LPC) at the Educopia Institute. The LPC is an independent, community-led membership association. The purpose of the LPC is to support an evolving, distributed range of library publishing practices and to further the interests of libraries involved in publishing activities on their campuses.

Lippincott received her Master of Science in Library Science from The University of North Carolina at Chapel Hill and her bachelors in the College of Letters and French Studies from Wesleyan University. Before joining Educopia, she served as a communications consultant for ARL, SPARC, and the open access journal eLife. In this interview she talks to Editage Insights about the role libraries play in scholarly publishing and where they are headed as stakeholders in the publication process.

What is library publishing and what role does it play in the scholarly community?

The Library Publishing Coalition (LPC) defines library publishing as “the set of activities led by college and university libraries to support the creation, dissemination, and curation of scholarly, creative, and/or educational works.” In practice, this involves libraries acting as the publisher of an array of content, such as e-journals, monographs, conference proceedings, database-driven websites, and datasets. Library publishing programs often come about as extensions of the library’s existing institutional repository services.

Library publishing is distinct from other library-led activities (such as curating digital collections) in that it deals with original content that has not yet been published elsewhere, puts that content through a production process, and applies a level of certification to the content (whether through a peer review process of by extension of the library’s institutional brand).

Library publishing contributes to the scholarly community by offering alternative and complementary services to traditional scholarly publishers. Many libraries focus on the scholarly output of their campus, providing a home for conference proceedings, data, technical reports, and other content that is often overlooked by traditional publication channels. Because most libraries do not generate revenue from their activities, they can take on publications of high quality but with limited commercial potential. They can also offer more flexibility than traditional publishers: allowing authors to retain more of their rights, experimenting with new media, and publishing open access.

In the changing framework of scholarship, what challenges and progress have library-based publishing groups undergone?

Library publishers face many of the same challenges as other digital scholarly publishers. Ongoing sustainability is a major concern for libraries and underpins many of these challenges. The majority of library publishing programs are mostly or entirely subsidized by the library’s operating budget. These programs do not typically generate revenue or even recover costs and therefore depend on the continued availability of this funding. It’s a model that has allowed libraries to jump in head first, but that may not carry us forward sustainably into the future. An array of new research and experimental funding models has emerged in the last couple of years to start to address this.

Please provide an overview of both the Educopia Institute, one of their affiliated communities Library Publishing Coalition (LPC), and your role here.

The Educopia Institute is a non-profit organization working to build networks and communities in the cultural heritage space. Educopia provides the legal, technical, and administrative framework that emerging communities such as the LPC need as they grow. The LPC was launched in January 2013 as a two-year, seed-funded initiative with 60 academic libraries participating in the setup. During this two-year start-up period, we refined the identity and mission of the organization, piloted some of its services, and began the work of building a community of practice for librarians who are involved in publishing activities.

Would you highlight the LPC’s program priorities for our readers?

LPC exists to advance the field of library publishing at the local and field-wide level. At the local level, we aspire to equip library publishers with the skills, expertise, research, and networks they need to improve their publishing services on campus. At the field-wide level, we want to raise the profile of library publishing and bring librarians into conversations with other scholarly publishers about the future of digital publishing, open access, and scholarly communications. In service of these goals, we offer the technical infrastructure for the community to interact online (through our website, list-serv, and webinars); convene the community at an annual conference; identify and respond to specific areas of need; and develop resources that help our stakeholders do their jobs.

Tell us a little about LPC’s membership: Why are members joining? How do members benefit?

The LPC has 63 members, all academic libraries in the United States and Canada. The restriction to North American libraries was deliberate; we wanted to grow the organization manageably over time to help ensure its viability in the long-term. This July, we will officially begin inviting academic and research libraries from anywhere in the world to become members. Our members include academic libraries of all sizes and profiles. We have large research institutions, liberal arts colleges, and comprehensive universities with library publishing programs that range from over a decade old to still in the planning stages.

I consistently hear from members that their primary reason for joining is to have access to a community of practice. They value the infrastructure and opportunities we provide for them to engage with their peers and colleagues to build best practices, ask and answer questions, solve problems, and find collaborators. We provide a range of other member benefits, including discounted rates to our annual Library Publishing Forum, opportunities to serve on committees and task forces, and access to our library of model documents (such as contracts, checklists, etc.). Finally, members are gaining a seat at the table in national and international conversations about library publishing. The LPC works and communicates with a growing network of other organizations in the library and publishing spaces and is an increasingly important voice for the library publishing community in these circles.

As you have mentioned, LPC’s membership is only open to institutions in North America. Have you had any global engagements?

As of July 1, we will begin accepting members from anywhere in the world. In the meantime, we have been building global connections, especially in regions that have embraced library-based publishing. Along with the LPC’s Board President, Kevin Hawkins (University of North Texas Libraries), I had the opportunity to speak at the Reinventing University Publishing Conference in Canberra, Australia, this winter. There is a tremendous amount of great work being done in libraries and university presses around digital publishing. Australian and North American universities have a great amount in common in this space and could learn a great deal from one another. We have also made connections individual libraries and library and publishing organizations in Brazil, Sweden, and the UK. We look forward to building these relationships and connecting our members with global conversations about the future of university-based publishing.

For the  benefit of our global readers interested in such a community-led program, could you point us to similar initiatives existing outside of North America?

There are many organizations operating in this space in Europe, though none that I know of are specifically addressing library publishing as a key strategy. SPARC Europe is doing wonderful work in the open access space, as is OASPA (Open Access Scholarly Publishing Association). The Council of Australian University Librarians (CAUL), which hosted the recent conference on reinventing university publishing has taken up the cause and has plans for more work in this area.

LPC’s second annual Library Publishing Forum (Portland State University) took place recently in March 2015. Can you tell us about the program and the major issues that you hoped to address?

LPC’s second Library Publishing Forum was a great success. We had just over 160 attendees and an excellent line-up of speakers from libraries, presses, and service providers from around the country and the world. We heard a lot about sustainability (a theme we encouraged), including new economic models, emerging collaborations, and exciting technical developments. A few highlights from the program included a sessions on an exciting collaboration around the future of the open access monograph from the California Digital Library and the University of California Press; a new cost-recovery model experiment at the University of Michigan; a start-up press initiative at Stockholm University; and the development of a digitally-enhanced book series from the University of British Columbia and UBC Press. Recordings from many of the sessions will be available via the event website.