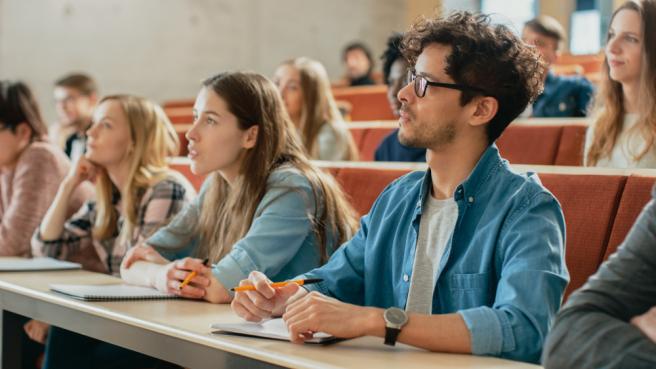 “I have no doubt that Alfred Nobel himself would have loved to be here with us at Lindau to discuss the issues of our times.”

Dr. Heinkensten’s could not have indicated the value of the Lindau Nobel Laureate Meetings in a better manner. The Nobel Prize is, arguably, the most prestigious scientific award and, for many young researchers, it embodies the success they dream of. For them, Nobel Laureates are like celebrities who can only be emulated from a distance. What if there was a way for researchers to not just meet Nobel Laureates but also exchange views with them over a cup of coffee? Every year, the Lindau Nobel Laureate Meetings give about 500 researchers a chance to meet and interact with Laureates from their field. For the Nobel Laureates, the meetings are a medium to influence young scientific minds by sharing their knowledge and experience. And for the young researchers who are chosen for the meetings, this is the opportunity of a lifetime!

History
The idea of getting a Nobel Laureate to interact with students was conceived six years after World War II by Franz Karl Hein and his colleague Gustav Parade, two physicians in the German town of Lindau. Hein and Parade wanted to set up an intellectual forum to help overcome Germany’s scientific isolation during and after the war and to encourage international scientific discussions. They approached Count Lennart Bernadotte af Wisborg to patronize and develop the concept further. The Count was convinced that this would help international scientific collaboration and he used his influence to invite Nobel Laureates to the meeting. On June 11, 1952, the Count inaugurated the first “European Meeting of Nobel Laureates in Medicine”. Since then, the Lindau meetings grew in popularity, size, scope, and focus to become the epitome of scientific exchange across boundaries. Over the years, the meetings have continued regardless of political issues, armed conflicts, or international crises, ensuring that their essence remains apolitical and purely intellectual.

Student selection
The Lindau Meetings receive student recommendations from more than 200 of their academic partners, which include universities, foundations, research institutes, and science academies. The nominations for each year are received in September/October. A review panel thoroughly vets students’ credentials before allowing them admittance. Some of the academic partners have their own selection process for choosing nominations from their institution. The entire expenses of the meeting, including travel and accommodation, are borne by the Meeting organizers.

The value of the Lindau Nobel Laureate Meetings
The opportunity to interact with experienced and successful researchers in their field provides researchers with much needed optimism and practical advice on the direction in which they can steer their research careers. The informal atmosphere at the Meetings and the opportunity to meet fellow researchers also promote healthy scientific exchange and expose participants to new research ideas that they could explore. Additionally, the fact that Laureates and participants are united by a shared passion for scientific development and collaboration makes the Meetings a truly rich intercultural experience. Nobel Laureate Martin Chaffie (one of the three recipients of the 2008 Nobel Prize in Chemistry) admits that “The scientific discussions are the high points of the Meetings…I wanted all of them [the students] to come to my lab.” In an interesting personal account, Chafie shares the primary advantages of the Lindau Meetings. First, they allow students and Laureates to have a healthy dialogue. Second, the Meetings give the students much needed recognition at a global level, and “everyone likes to get the occasional pat on the back.”

To establish how the Lindau Nobel Laureate Meetings influence participating researchers, we looked at what they had said about attending the Meetings. Here’re a few first-hand accounts:

The atmosphere at these meetings is indeed unique and fosters a friendly and scholarly environment in which a younger generation of scientists can learn many different lessons from an older generation of scientists. In some ways, the Nobelists are the ambassadors from the scientific futures of the younger delegates — showing them just what they can achieve and what they can become.

Nobel Prize facts part 2: Laureates by field and country
In the first part of the Nobel Prize Facts series, we…
7.6k

Lindau 2009: Eyes on the prize by Stuart Cantrill

As a scientist, I was drawn to Lindau for the chance to mingle with scientific celebrities, to bask in the glow of their wisdom and knowledge, and to commune with my fellow fans of these heroic personalities…More than anything, I wanted to pick the Laureates' brains about 'how' they approach and go about doing science…This is one of only a handful of events that shapes our understanding of what it means to be a scientist, what our place in society can be, and how it feels to be part of a global community of researchers sharing a passion for science. Furthermore, we have now become a part of the history of the meetings themselves, and it is this shared narrative that we will now retell to our peers and to future students.

Looking back on Lindau by Jeffrey R. Lancaster

Interaction with the Laureates, most of whom have been our textbook heroes, is highly enriching. Informal interaction with them helps students get to know them as people. The credit goes to the Laureates themselves who are at pains to impress upon us that they are ordinary individuals with just an incredible sense of curiosity. In fact, they make us believe that they had come down to Lindau to gain knowledge and inspiration from us!

Attending a Lindau Nobel Laureate Meeting certainly does much more than adding great value to researchers’ CVs. The Meetings are a platform for Nobel Laureates to educate, inspire, and connect with the next generation of researchers.

Does the thought of meeting a Nobel Laureate excite you?
If you are an early-career researcher and would like attend a Lindau Nobel Laureate Meeting, check whether your university, foundation, research institute, or science academy is one of the academic partners of the Meetings. You could also visit the website of the Lindau Nobel Laureate Meetings to refer to a full list of the academic partners as well as the application and selection process of the Meetings. (Note that your institution may apply additional selection criteria.)