It was quite challenging to become a professor - Dr. Sven Hendrix 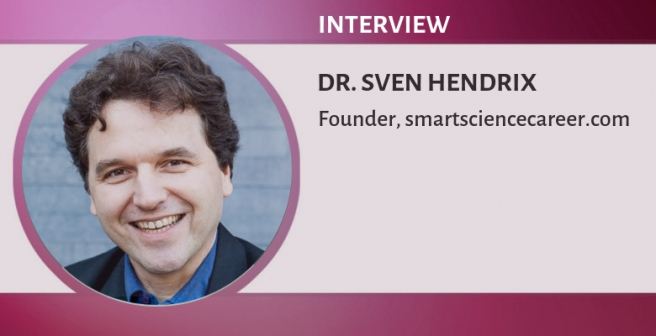 Have you heard of smartsciencecareer? It is a community that aims to provide researchers with advice on dealing with various challenges in their academic life and developing the skills to make the right career choices as academics. I am in conversation with Dr. Sven Hendrix, founder of smartsciencecareer and a Full Professor for Neuroanatomy as well as the Director of the Doctoral School for Medicine & Life Sciences at Belgium’s Hasselt University. Dr. Hendrix set up smartsciencecareer as an avenue to share his knowledge with researchers and to help them get answers to “many other questions that young scientists face as they make their first few career decisions.” The platform includes interesting tips on topics such as finding the right job, developing leadership skills, etc. It also hosts online courses for researchers as well as organizes events to support early-career researchers and young scientists.

While studying medicine in Berlin, Dr. Hendrix discovered his passion for science. Following an MD degree in 2002, he went on to play several professional roles including head of a research group, anatomist, and project leader. After securing his Habilitation degree in Neuroimmunology in 2007, Dr. Hendrix became full professor and went on to assume various academic functions, e.g., as Head of the Department of Anatomy, as Vice Director of the Biomedical Research Institute (BIOMED) at Hasselt University in Belgium, and as Chairman of the Dutch Anatomical Society.

What’s the story behind smartsciencecareer?

Every generation of PhD students and postdocs struggles with very similar problems, such as:

How do you decide what topics to cover on smartsciencecareer?

In the beginning I covered all those topics which I wished I had understood better when I started my career as a scientist. I have made many mistakes and I have received a lot of terrible advice. I just wanted to help young scientists to get a better start.

In my university and at the national level we have organized hundreds of career development events for PhD students and postdocs such as courses, symposia, and summer schools. The young scientists have told us very clearly what they need and these needs are also the topics I cover in my blog.

What kind of feedback have you been receiving from researchers who have joined your community?

I have received a lot of grateful emails and a lot of new questions – especially from non-European countries where doctoral school networks are not established.

On the smartsciencecareer website, you mention that “Navigating my science career has been a long and challenging journey.” What are some of these challenges you faced?

It was quite challenging to become a professor. I applied for more than two years on every open position and again and again I met the same group of young colleagues who also tried to become professors. Unfortunately, most of these positions were senior positions (full professor) and none of the young candidates had a chance. It was very frustrating for all of us. Finally, I decided to apply internationally and nearly immediately got invited by a big and famous university in the UK and two smaller universities in Denmark and Belgium. The negotiations were a challenge but also exciting. The best offer came from Belgium.

You also lived, studied, and worked in several countries? This is something a lot of researchers need to do while pursuing further research or career opportunities within academia, but they also find this challenging. Any tips for researchers relocating to foreign countries?

I wrote a post about my experiences: “Nine reasons not to go abroad – and how to handle them!” The most challenging but also most enriching aspect is, of course, the integration into another culture. On the one hand you experience all the negative aspects such as discrimination, being lonely and making a lot of intercultural mistakes. On the other hand you may become much stronger, more self-confident and mature, and you learn to handle cultural differences and get to know different concepts of scientific leadership.

What are some of the mistakes researchers commonly make while focusing on their career decisions? What would your advice to them be?

The number 1 mistake I see in Europe is that more than 90% of all young scientists expect to pursue an academic career although only about 10% will stay in academia and only half of those will become a professor. The good news is that nearly all PhD holders will find a job because the unemployment rate is very low. However, young scientists should start very early during their PhD to learn about their career options by talking to people who work in companies, in hospitals, or in policy or politics.

The second classical mistake is to focus too much on impact factors without reflecting well about whether a fantastic publication list is really the most important asset for their future career.

I came across an interesting paper you co-authored: “Both Whistleblowers and the Scientists They Accuse Are Vulnerable and Deserve Protection.” How so?

Two of my supervisors have been falsely accused of scientific fraud. For all co-authors (including myself) it was a terrible experience. Although we knew that we did not do anything wrong, we were all afraid that these accusations would ruin our careers. To make things worse, we were terrorized by a self-acclaimed whistleblower who behaved like a classical internet troll. It took several years until official investigations finally came to the conclusion that the accusations were unfounded.

Unfortunately, most research institutions in the Western world have the tendency to leave the accused scientists alone and care mostly about the reputation of the institution. Whistleblowers need to be protected because they nearly always suffer from blowing the whistle. They may lose contact with their colleagues and friends, they may lose their jobs and they may face emotional problems. The same is true for accused scientists.

It is our mission to make research institutions aware of their responsibility not only toward the whistleblowers but also toward the accused scientists. In the community of research integrity officers there is growing interest in this aspect. I am convinced that they will develop trustworthy procedures to address this problem. Only when accused researchers trust the procedures and the committee which investigates a potential fraud case they will cooperate. If there is no trust even the most honest scientist will become defensive.

Do you have any words of advice for researchers who have come across cases of misconduct and plan to make the information coupublic or intend to bring them to the attention of the relevant authorities?

The most important first step is to find a trustworthy person who can give advice how to handle the situation. Do not do this alone – do not try to find your strategy via Google. There is a lot of contradictory and misleading advice out there on the internet. Find a trustworthy person such as the ombudsperson of your university or a politically experienced senior colleague who is not involved in the case in any way.

What should researchers do if they are falsely accused of misconduct?

You’re a qualified medical doctor, hold a PhD, and are involved in several academic and professional duties. Yet, you say that, “In my current role, I’ve found a good career and life balance.” What’s the secret behind your ability to maintain good work-life balance?

Well, this is true most of the time. I have collected a number of valuable tips from my colleagues and summarized them in a post “12 strategies to combine a successful career in science with a healthy family life.” Everything in this post is true; unfortunately, it does not always work out this way. I also had phases of massive frustration which took quite some time to recover. Fortunately, my family and friends supported me a lot. I find it important to make young scientists aware of this because most people hide it very well when they are close to burn out. Based on these rather painful experiences I even developed an inexpensive online course on how to work hard without burning out which will be published soon. I hope that it will help many young scientists to avoid burn out and follow their passion in science with ambition.

Thank you, Dr. Hendrix, for your time and for the great advice!

It was quite challenging to become a professor - Dr. Sven Hendrix 9 min read