Researchers explain how a droplet moves on a solid surface
Charge change: How electric forces vary in colloids
Common errors in the usage of abbreviations in scientific…
New study identifies the novel coronavirus responsible for…
6 Quick and easy ways to better explain science to non… 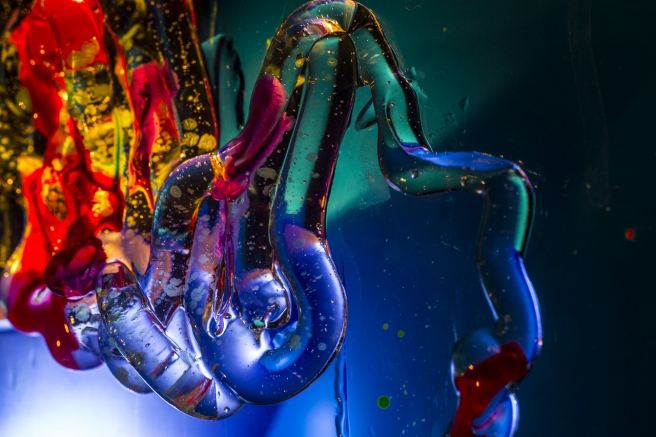 We encounter various types of fluids every day, and in every fluid; the constituent particles are always moving and colliding with each other at an unimaginably high frequency (this motion is called thermal motion because it is closely related to temperature and thermal energy). We cannot directly see the thermal motion of small particles composing a fluid with just our eyes, but recent advances in techniques like super-resolution single particle tracking and molecular dynamics simulation have made it possible to monitor real-time trajectories of microscopic probe particles and molecules undergoing thermal motion in various fluids. The observed thermal motion is far more complicated than predicted by the classical theories of Brownian motion or their modern generalizations. This discrepancy between theory and experiment increases with the complexity of the fluid system under investigation. While the details of thermal motion vary, depending on the fluid in question, most complex fluids exhibita few common features in their thermal motion. What mathematical equation governs the thermal motion of complex fluids? What is the origin of the common features observed in the thermal motion of these fluids? These have been open questions for a long time.

In a new study published in the Proceedings of the National Academy of Sciences USA, a group of researchers from Chung-Ang University have proposed a new model of the probabilistic molecular movement in complex fluids, in order to solve the longstanding puzzle of thermal motion in complex fluids. Led by Professor Jaeyoung Sung, the research team at the Center for Chemical Dynamics in Living Cells (CDLC) at Chung-Ang University derived a general transport equation that successfully explains, in a unified manner, the thermal motion of particles in various complex fluids. 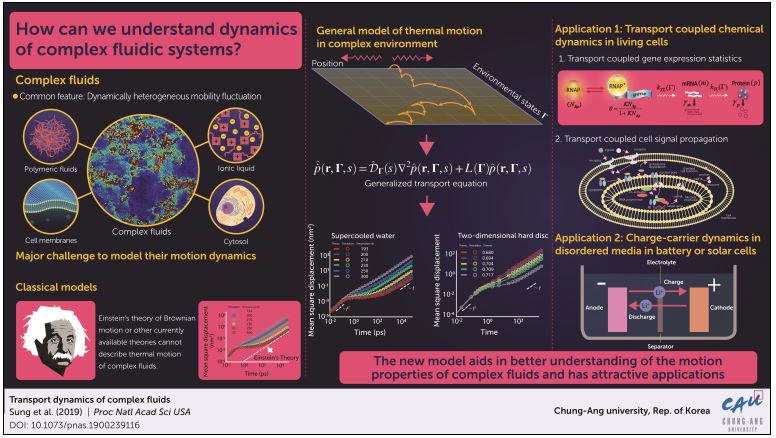 It had been observed before that the displacement of particles in complex fluids does not assume a normal distribution (also known as a Gaussian distribution), and this deviation increases at short times but decreases at long times. Various complex fluids commonly exhibit an unusual time dependence of the mean-square displacement, a measure of the space spanned by a randomly moving particle. In their study, Professor Sung and his colleagues used a unique theoretical approach to construct a quantitative model for a dynamical system interacting with complex environments. This approach was developed in their recent paper, “The Chemical Fluctuation Theorem governing gene expression” published in Nature Communications in 2018, and makes it possible to derive a general transport equation for complex fluids, starting from a hidden environment-coupled random walk model. Professor Sung explained, “It is difficult to construct a model, that is both accurate and explicit, of systems interacting with a complex environment because, most of the time, we don’t have enough information about the environment how it interacts with the systems. We can avoid this difficulty by employing a general and flexible model for the environment and its interaction with the system.”

Interestingly, they showed that, starting from other models in which all molecules in a fluid obey Newton’s equation of motion, the same transport equation could be derived. Encouraged by these observations, the scientists went on to confirm that this newly obtained transport equation is universally applicable. By accurately explaining experimental data obtained for a number of complex fluidic systems, including supercooled water (water that is cooled below 0°C but has not yet frozen and is therefore between liquid and solid phases), colloidal beads moving on lipid tubes, and dense hard disc fluids, they succeeded in showing their transport equation is valid for various types of complex fluids.

Professor Sung and his team are optimistic about their findings and believe that their theory has opened new doors for a number of applications. As Professor Sung notes, “Our work can be applied to various fields of modern science. For example, most biological processes occur thanks to transport processes in complex cell environments. Batteries and solar cells operate through transport of charge carriers in complex media. Our work would help scientists understand and predict the dynamic behavior of these complex systems.” Talking about the future prospects of the study, he says, “At the CDLC, we are currently applying this work to investigate transport-coupled chemical dynamics in living cells, which are essential to understand the dynamics of cell signal propagation and cellular response to external signals.”

Webinar
Conquering mental health demons in my STEM journey
In this hour-long session, Prasha will reveal some of…
3.9k views

Dr. Sung is a distinguished professor (the 1st CAU Contribution Scholar) at Chung-Ang University and the Director of the Creative Research Initiative Center for Chemical Dynamics in Living Cells, funded by National Research Foundation of Korea (NRF). He is the corresponding author of this study and has been a faculty member of Chung-Ang University since 2004. He has also served as a review board member of NRF and a board member of academic affairs at the Korean Chemical Society. Professor Sung’s areas of research include chemical dynamics in living cells, quantitative biology, single molecule dynamics, statistical mechanics of small systems, and molecular transport/reactions in complex media.