"Science and technology in Asia will witness an exponential growth in the coming decades." 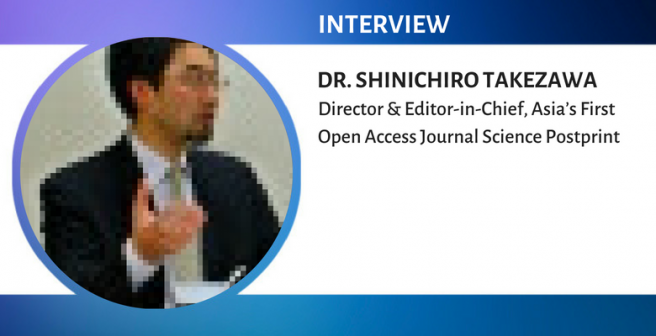 Dr. Shinichiro Takezawa is the founder of Science Postprint (SPP), Asia’s first open access scholarly journal. He is also CEO of the Japan-based company General Healthcare. Inc. that provides web-based solutions in the healthcare and life sciences domains. Dr. Takezawa has rich academic and professional experience. He earned a doctorate in Molecular Biology from the University of Tokyo. He conceptualized SPP to set up a crowd-funding based environment to foster international collaborative research in medicine and the life sciences and to enable open access publication in Asia. Dr. Takezawa is extremely passionate about his work, about scientific publishing, and about everything related to SPP. In an interesting conversation with Editage Insights, he reveals the inspiration behind SPP and shares his views on scholarly publishing in Asia.

Launched in October 2013 by a group of inspired professionals from China and Japan, SPP is Asia’s first open access scholarly journal for integrated science. SPP accepts manuscripts in the fields of medical and life sciences not only from Japan but also from the rest of Asia. Its editorial board consists of 458 members. SPP also follows a unique grading system to evaluate manuscript submissions, wherein proofreaders assign grades to a manuscript based on pre-established criteria. Through his involvement with SPP, Dr. Takezawa is pursuing his mission of improving the efficiency of research scientists by providing them with an innovative environment that challenges them to perform well.

What led you to set up SPP?

The idea of a venture that would benefit Asian authors first occurred to me during my PhD, when I gained first-hand experience of the publication cycle, from manuscript writing to submission and publication. When I was writing papers as a researcher, my professor wanted me to submit manuscripts to various journals. Sometimes, even though I was prolific and authored manuscripts quickly, the processes of review and resubmission were time consuming and occasionally spanned over six months. Then, there would be times where journal reviewers or editors would ask me to conduct additional experiments after resubmitting the manuscript. On an average, it would take over six months to receive peer review decisions and comments for one paper, and on occasion, I spent more than four years trying to submit my manuscript to various journals in order to get it published. It was not about the failure or the fact that my paper was rejected. Each time I went through the same cycle of submission, peer review, and revision, I began to wonder if there was a point to getting my paper published. I was not really making much progress on my research work either as my findings were not yet published. I also knew that there were hundreds of researchers out there like me, going through the same process and experiencing the same anxiety. This experience gradually led to a desire to do something to improve the manuscript submission environment for researchers and make their lives simpler.

Why the focus on Asia?

The global scientific community has largely focused on the scientific and medical development and innovations led by Europe and the United States. But I believe that researchers in Asia, too, need to grow and become involved in various research developments on a global scale. After all, scientific research benefits all of humanity. And research involves a lot of effort, irrespective of the region where the researchers are located. Everyone deserves their due and needs a platform to disseminate their findings. My primary focus has always been on improving the flow of information for professionals, including researchers, physicians, and those engaged in one of the medical professions. Facilitating the flow of information for these professionals has always been a major focus, and SPP helps us achieve this goal.

Why did you choose the open access model for SPP?

It’s all about the need to adapt to changing times. Let us look at the origins of scientific communication through the publication of academic papers. One can say that the technological advancements ushered in by the industrial revolution in the UK worked hand-in-hand with scientific advancement, which enabled the dissemination of printed scientific papers. This in turn led to the launch of journals such as Nature and Science between 1860 and 1880. Today, over 150 years later, the same technology and means of sharing scientific findings cannot be used as they are somewhat outdated in this age of digitization. This line of thought led me to opt for open access for SPP.

I am optimistic that the journal will provide a boost to scientific development in the Asian region. I have no doubt that science and technology in Asia will witness an exponential growth in the coming decades. The economies of countries with large populations, such as China and India, will only improve in the future. I believe that scientific growth and development in any country is proportional to its research funding, which is improving in Asia. Given this, an avenue such as SPP will serve as the means to disseminate scientific information in Asia, and by providing unrestricted access to published research, we can ensure that we are able to reach out to everybody and influence change.

What kind of reception do you expect for SPP in Japan?

I am not expecting all Japanese researchers to immediately begin submitting their manuscripts to SPP, given that we launched the journal in Asia and not specifically in Japan. Of course, I know that we will be supported by researchers and scholars in Japan. The larger aim is to reach out to a wider research base and eventually go global. Even though we expect a slower start in Japan, I am confident that Japanese researchers from the medical and life sciences will look to SPP as an innovative leader in scientific communication and their gateway to global science.

So how is SPP different from other open access journals?

SPP has many distinct features that set it apart.

A common perception about open access journals is that their quality control mechanisms – the peer review process in particular – are poorly formulated and ineffective. What can you tell us about SPP’s peer review mechanism?

This is a myth and it’s about time open access journals across the world are taken seriously. SPP currently has nearly 200 national reviewers and 300 international reviewers. Roughly 50% of SPP’s reviewer base constitutes senior researchers, professors, and associate professors, while the other half includes junior researchers, lecturers, and assistant professors. The primary motivation of the experts who volunteer their services is to contribute to society by helping publish robust science. The peer review evaluation system at SPP will steadily evolve in the coming years. Going forward, we also hope to be able to incorporate post-publication peer review.

I know that as a journal, SPP should first be listed on the Web of Science database for having its impact factor calculated. But once SPP is listed, the impact factor will be calculated after two to three years based on the citation index at the time. In short, although it will take two to three years for SPP to get its impact factor ranking, we just need to clear the screening process set up by Web of Science. This is how all journals begin. I’m sure we will be listed soon as we have a steady stream of published papers.

I must clarify that at SPP, we believe that impact factor is not everything and attracting authors to this philosophy is another challenge. As an initiative to combat the excessive reliance on the impact factor, we are currently building upon a novel approach – that of calculating the rate of falsified papers in high-impact journals, mid-impact factor journals, and lesser known journals. We are attempting a data analysis based on the hypothesis that the falsification rate increases as the impact factor increases. We hope that our findings will help researchers understand that it is okay to not publish their papers only in very high impact factor journals.

What are the main areas that SPP is currently focusing on?

We first need to work on attracting researchers to SPP. For that, we need to attract researchers’ attention to open access publication. The publish-or-perish culture in research where future prospects and funding opportunities depend on publications has made it difficult for researchers to stray away from the conventional publication methods. It is only a matter of time before open access is adopted more readily and on a larger scale.

Research misconduct is another area we are focusing on. SPP is developing a system to spot dishonest research. The popular saying “standing on the shoulders of giants” implies that scientific development is made possible because of the foundations of previous scientific discoveries. But when the established concepts have been derived from suspect methodologies or by employing unethical practices, the entire body of knowledge is brought into question. At SPP, we are clear that we do not encourage bogus science and will only attract ethically sound papers. We want to establish a reputation as a publication that conducts its own reviews and investigations and does not tolerate any form of ethical misconduct with regard to research methodology or publication. We believe that such an explicitly stated stance will attract only clean manuscripts. I know that there are several who may think that being a new open access journal, SPP would be lenient with quality control. In fact, we are certain of the extra importance we need to place on stringent quality control to ensure that we establish a solid foundation.

At the end of the day, larger issues like science policy are only secondary concerns for researchers. The primary concern of every researcher is getting his/her paper published. And by providing a quality focused environment for publishing and disseminating research widely, SPP is catering to the actual needs of researchers.

"Science and technology in Asia will witness an exponential growth in the coming decades." 11 min read