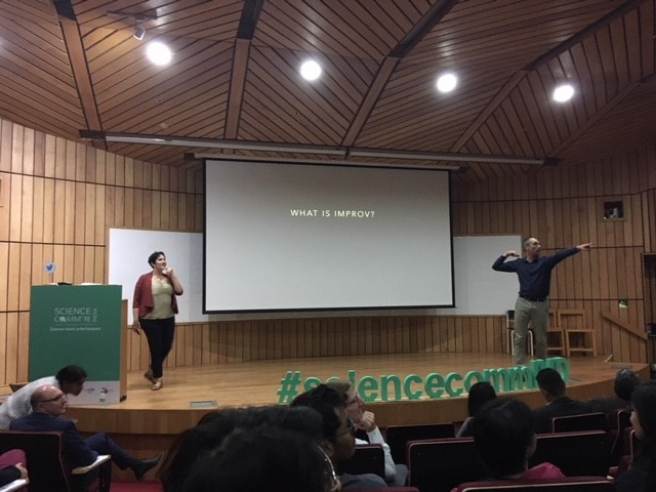 I was fortunate to attend the 2nd edition of the science communication conference called ScienceComm’18 India organized by Swissnex India in partnership with the National Centre for Biological Sciences (NCBS) and Science et Cite early this month. The daylong conference on engaging talks and workshops on the ‘sciencetainment’ or science + entertainment, was set in the lovely campus of NCBS, Bangalore, and included 7 exemplary talks by well-known speakers of various backgrounds from both Switzerland and India.

The audience included around 150 varied participants– including students, researchers, writers, illustrators, as well as communications personnel from different organizations across India. I interacted with several of them and found the communication intellectually stimulating.

In no time, it was 9:30 am and we took our seats in the auditorium. The session was inaugurated by Sebastien Hug, CEO of Swissnex India and the Consul General of Switzerland and Dr. Upinder Singh Bhalla, dean of NCBS. They both highlighted the importance of science communication and how science can be fun if communicated engagingly.

The ensuing talks covered different ways of engaging the audience and of different avenues for research outreach. In this post, I will share with you the outreach programs organized by CERN, Switzerland, how science can be fun and educative through play and improv, and how researchers can crowdfund their projects if conventional funding is limited.

1. How CERN sustains interest and engagement in fundamental research:

Ana Godinho, Head of Education, Communications and Outreach at CERN was the first speaker of the day. She began by telling us what CERN was all about and showing us some amazing images and videos of the on-going projects at CERN. If you haven’t heard about the God’s particle or don’t know what a Large Hadron Collider (LHC) is, this was the right place to be. She slowly geared the talk towards the importance of disseminating what CERN does to the larger public and how they go about making fundamental physics exciting and interesting to the entire population! She broke it down for us:

a. Tell human stories: Stories about the scientists behind the major discoveries can grab the attention of people worldwide. They can become popular on social media and improve the time spent by a reader on your website. b. Exhibits: One of the ways in which CERN makes science simple is by creating microcosms and interactive ways to narrate fundamental science. For example, they have a Large Hadron Collider football field where two people can kick an imaginary ball that collides and the effect of the impact is then visually demonstrated. What a fun way for kids and adults to learn physics!

c. Write stories about cutting-edge technology: CERN writes stories about their cutting-edge technology. The stories on their large tunnels and the LHC to study the tiniest of particles are popular and a good way of spreading the word on what they do. Godinho awed us with pictures of the tunnels that cover the 27-km-diameter area under the city of Geneva and the massive images of the detectors that are 15 m high and take hundreds of images a second!

d. Use animation to tell stories: With a simple animated video, Godinho was able to tell us exactly how the LHC works and what happens when the particles collide with each other.

e. Group tours and traveling exhibitions: CERN opens its doors to allow tourists to explore their cutting-edge technology. This part got me very excited - someday, perhaps I will make it to CERN! Moreover, they also organize traveling exhibitions. The one to look out for is called ‘Accelerating Science’ and is coming to India in 2019.

f. Collaboration: The CERN convention brought 12 countries together and now has several initiatives where over 13,000 physicists so far have used their facilities.

g. Inspire future generations: CERN has several programs to support high school students and teachers. Their teacher programs and summer camps for students are very popular, with hundreds of applications each year. Additionally, they also have opportunities for school students to send in proposals for the experiments they would like to carry out at CERN.

How to network at a conference
Networking is an extremely important part of attending…
16.7k

The session “Transforming science and scientists through play” was right after a sumptuous lunch, but it kept us so entertained that there wasn’t a dull moment or any question of nodding off! Adria Leboef and Samuel Lagier, scientists from The Catalyst took us through some basic “improv" games and kept the audience engaged and looking forward to the next game.

They explained that improv is the art of making things on the spot and talked about how The Catalyst engages large crowds through science improv, science film, science theatre, and science games. These activities help in making science fun through a different way of communication, enhance community and mental health, and aid in conducting research. How so?

a. Science communication: Research can be complex and difficult to communicate with those who do not understand science. Improv is a great research outreach avenue for training researchers to find alternate ways to communicate their science.

b. Community/mental health: Research can be full of failures. Improv builds a safe space where failing can be fun. Games can be designed where failure is inevitable, but yet fun. Improv also has the benefit of bringing everyone at the same level and thereby taking competition out.

c. Conduct research: Research is full of dead ends. Improv can find help one find the creativity to change a research story and find alternate pathways. Appropriate improv games can help with creativity, spontaneity, and collaboration.

The session ended with the following learnings:

a. Passion is the best nucleator

b. Creativity is a currency of reward

The speaker of this session was Luc Henry, who is the scientific advisor at Ecole Polytechnique Fédérale de Lausanne (EPFL). His talk was interesting and novel for the scientist in me. As a researcher, we always think of long-term funding, look for grants that will last 3-5 years and offer support for large experiments. Henry put the seed in my head that not all research needs to be long term. Several novel ideas could be implemented by doing research over short 3- to 6-month spans. He introduced the idea of crowdfunding where anyone can launch an initiative and appeal to the crowd to contribute towards a small-scale project. There are multiple sites that cater to crowdfunding such as https://wemakeit.com/. He talked about a single project where 3000 people donated to bring in $1.5 million. Now, this is a creative way of procuring funding!

How to prepare for an excellent conference presentation
Presenting at an academic conference is an important…
6.1k

How do you build such a campaign? Here are some points to consider that I gathered from Henry’s talk:

a. Build a story: Why should someone contribute towards your project versus another one? Think about the relevance and impact, and build an emotional link that would perk people’s curiosity.

b. The target audience: Why them? How can you reach the right audience? Think about your ability to explain complex topics, engage the public, and convince them to donate to your project.

c. The rewards: What can you offer to the folks that contribute?  While you would benefit in obtaining a small fund for your novel initiative, the public can learn about science, connect with researchers, and feel the connection with scientists and their direct contribution.

With these novel thoughts and ideas on science communication, we broke for coffee, where we got to interact not only with the other participants but also with the speakers. I went up to Adria Leboef to tell her how impressed I was with her session and how the games she proposed would be particularly useful in engaging children and piquing their interest in science. It was a great pleasure connecting with her and other bright minds.

Would you like to know more about the ways to improve science communication? Stay tuned for my next post in which I will share some more interesting insights from the conference.